Earthquake: Pray for the people of Sikkim

The Aftermath of the Earthquake

The funeral service for a Gospel for Asia-supported missionary's wife who died in last week's earthquake was conducted in the shell of the church building destroyed in the disaster.

Nirmala Tamang was crushed by a collapsing church wall while trying to escape the Sept. 18 quake. Nirmala's husband, B. Tamang, is a Gospel for Asia-supported missionary serving in Sikkim, India near the epicenter of the quake.

"The entire Gospel for Asia family is saddened by the death of Nirmala," said K.P. Yohannan, Gospel for Asia Director. "She faithfully worked alongside her husband to bring the love of Jesus to the people of Sikkim."

A team traveling to bring comfort to the family and help with Nirmala's funeral reported firsthand on the damage the quake left behind.

Contact between the missionaries on the field and the leaders was sporadic since communication networks were down. Team members were forced to redirect their travel several times as they encountered roads blocked by debris and landslides.

"Our leaders could have given up and gone back home, but they knew it was important to be there for Pastor Tamang and his church, so they prayerfully continued," Yohannan said.

After a grueling journey, the team finally arrived in Pastor Tamang's village. They assisted with Nirmala's funeral service. Afterwards, they fanned out to assess the damage and talked to dozens of people whose homes were completely destroyed. They also prayed with these families and encouraged them in the Lord.

"This dedicated team of GFA leaders returned to their home offices fully prepared with information and the details they needed to equip our Compassion Services teams to go back into these devastated villages," Yohannan said. "Our Compassion Services teams are now ministering to hundreds of people who are living outside in the elements because they are unable—or afraid—to return to their homes. The cold weather is settling in and these devastated people need our help."

Many of the locals, including people who attend Pastor Tamang's church, also lost livestock during the quake.

"We plan to replace those animals with gifts provided through our Christmas catalog," Yohannan said.

Ministry Affected by the Quake

The quake was a definite blow to Gospel for Asia's ministry in Sikkim. Initial reports indicate that 10 families from the local churches lost their homes. Two missionaries also lost their homes as a result of the quake. Two church buildings completely collapsed. Ten other churches are damaged, but not completely destroyed. Compassion Services teams will help the people rebuild their homes and churches.

"The missionaries who serve as pastors of these churches will not let this slow them down," Yohannan said. "They will continue to worship the Lord and teach His Scriptures in alternate locations until their church buildings can be rebuilt. Some of them will meet outside, while others will be able to meet in homes or rented spaces."

The epicenter of the earthquake was in Sikkim, but the effects were felt hundreds of miles away. In neighboring Bihar, India, a church and several believers' homes—including those of Bridge of Hope children—were destroyed.

The earthquake was also felt in the neighboring country of Nepal. While it wasn't as intense, the quake did cause substantial damage to several ministry sites in the country, including several local English medium schools.

The schools, which are housed in simple concrete block buildings with tin roofs, are not safe for students, so school has been halted for the time being.

There are only a few reports of damaged homes and churches in Nepal.

Compassion Services teams are already in the affected areas tending to the immediate needs of the people by providing them with food, water and warm blankets. The teams will work in the areas for the long-term, arranging for supplies to help the people rebuild their homes and providing necessities, such as bed linens and cooking utensils, which were lost during the quake.

"Our Compassion Services teams know it is of vital importance to provide both practical, physical help, along with spiritual comfort," Yohannan said. "That's why they will take time to pray for those affected by the quake and offer them the hope found in the love of Jesus Christ."

A Gospel for Asia-supported missionary's wife died Sunday when an earthquake measuring 6.9 on the Richter scale struck Sikkim, India.

Pastor B. Tamang and his wife, Nirmala, were enjoying a fellowship meal with some church members and two Bridge of Hope workers in their home in Sikkim, India when the earthquake struck just after 6 p.m.. They live near the epicenter of the quake. Due to the mountainous terrain, all the buildings are constructed terrace style into the sides of the mountains. The Tamangs' home is located just below the church where he serves as pastor.

The earthquake struck at 6:10 p.m. and everyone in the Tamangs' home scrambled to get outside. As they were running, the church building collapsed and Nirmala was crushed beneath one of the falling walls. Pastor Tamang and the rest of the Christians with him also suffered major injuries and are being treated at a local hospital.

"We are deeply grieved to hear about Nirmala's death. Gospel for Asia has lost a vibrant Christian woman who served as an example of what it means to love the Lord your God with all your heart." said Gospel for Asia Director K.P. Yohannan. "While supporting her husband's work, she led a dynamic ministry reaching out to the women in this area. Please be in prayer for this dear brother and all those in his ministry area who are filled with sorrow because of this situation."

Not Sure What Lies Ahead

Several churches led by Gospel for Asia-supported missionaries were also destroyed in the quake. But the full effect of the disaster on the ministry has yet to be determined, according to Yohannan.

"We have literally hundreds of missionaries serving throughout this area, as well as dozens of Bridge of Hope centers," Yohannan said. "The earthquake cut off electricity and took out the normal communications channels, so we don't know the full extent of the damage."

The earthquake came during the Indian monsoon season, and the heavy rain, coupled with the shifting ground, led to landslides. Several major roadways are blocked, preventing teams from reaching the people who need help. The heavy monsoon rains are also preventing helicopters from flying in to assess the damage, according to news reports.

The BBC and CNN report the earthquake shook the border region of India and Nepal with one major quake of 6.9 and two aftershocks measuring 4.8 and 4.6. All three quakes occurred over a one-hour period of time, starting just after 6 p.m.

Monday's news reports indicate that 35 people died in the quakes, but government officials expect the death toll to increase as rescuers find bodies. The area where the quake hit is at the base of the famous Himalaya Mountains. The majority of the area is comprised of small, rural villages carved out in the sides of the mountains.

Nepal's capital city of Kathmandu was also rocked by the quake.

Nepali and Indian news outlets reported that dozens of people were also injured as they attempted to escape by jumping off of buildings. Others were caught up in stampedes as terrified people tried to make their way to safety.

"The people in this area are facing a huge catastrophe and they are frightened," Yohannan said. "Many may not be able to get out of their village to get needed medical attention or food. Those who lost their homes are stuck outdoors, trying to find any shelter from the driving rain and colder weather. They desperately need our prayers."

Ready for the Disaster

Gospel for Asia's Compassion Services teams are mobilizing in the area, and they will begin helping those affected by the quake as soon as they are cleared to enter the damaged areas.

"The people who suffered through this quake are desperate for help and for a sympathetic ear," Yohannan said. "Our Compassion Services teams will give them the practical things they need, like food and blankets. They will also pray with them and offer the hope of God's love. The teams are committed to working in this area for as long as it takes to bring complete restoration."

Read about GFA's ministry in Sikkim, India, an area affected by the quake. Nirmala Tamang, shown at right with her husband, GFA-supported missionary B. Tamang, died in Sunday's earthquake. GFA leaders are shown reading Scripture at Nirmala Tamang's funeral service. The service was conducted in the shell of the church building that was damaged by the quake. 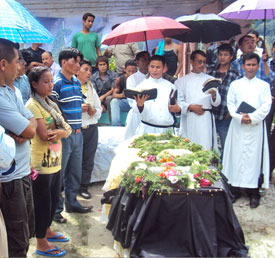 
Pastor Tamang's church building was destroyed during the earthquake. One of the walls fell on Nirmala Tamang and crushed her to death. 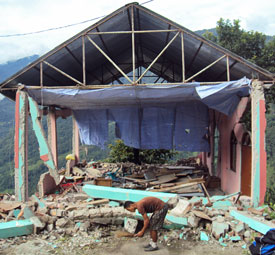 
GFA leaders traveling to Pastor B. Tamang's village encountered numerous obstacles along the way. This road was blocked by a giant boulder that fell as a result of the quake. 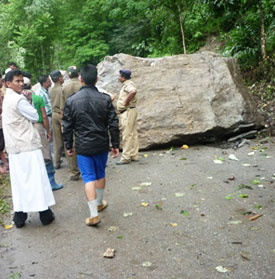