A spray of bullets cut through the forest, seeking out the criminals. The band scattered as shouts broke out. Right and left, men dove for cover, but Nimal wasn't fast enough. A bullet struck his head, and he fell to the ground.

The gunshot came after 22 years of suffering. When Nimal was an infant, his father left the family and ran off with another woman. Nimal's mother had no way to provide for him, so she also abandoned him, leaving their homeland of Sri Lanka to find work in another country. Nimal was never to see his mother or father again. 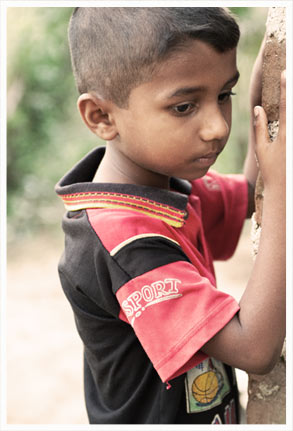 Nimal's parents abandoned him at a young age. As a teen, he found employment breaking the law.

Left in his aunt's care, the young child often watched with eyes full of tears as his cousins were fed and he wasn't. He tried to satisfy his hunger by filling his stomach with water.

Nimal had no one to help or encourage him in his education, either. He went to school through the fourth grade and then dropped out. The lonely boy began to walk the streets each morning looking for work so he would have food to eat.

He lived this way for years until the day he met a group of men in a big truck. They were headed to work in the jungle, and they asked if he would like to join them.

The men were cutting down trees in the rainforest—illegally. They would then sell the valuable wood. Last century, deforestation wiped out a significant portion of Sri Lanka's forests. Regulations haven't stopped the logging, so the government tracks down and raids the criminal enterprises.

The job offer was illegal, not to mention dangerous. But to a young man who had lived hand to mouth his whole life, the money was too good to pass up. He took the job and became a thief.

Authorities Open Fire on Thieves among the Trees

On the day forest authorities rained down bullets on Nimal and his company of tree thieves, the Lord used a gunshot to take him out and give him new life.

“Jesus said to them, 'It is not the healthy who need a doctor, but the sick. I have not come to call the righteous, but sinners.'” Mark 2:17

The head wound landed the 23-year-old in intensive care, unable to move most of his body. The doctors weren't sure if he would survive; all of them gave up hope for his recovery.

Many times in his life, Nimal had thought,"I'm the most unfortunate man in the world." He didn't know about the unimaginable suffering the Son of God had endured for him, but the Lord was about to tell him.

A local pastor came to the hospital during Nimal's stay and shared about Jesus. Nimal believed what the pastor said, and he began to trust Jesus to defy all odds and heal him.

"How do I pray to this Jesus?" he asked the pastor. 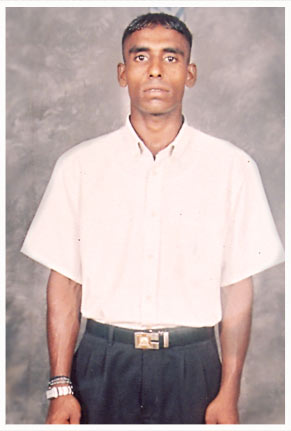 A gunshot wound marked the end of Nimal's life of hardship. A pastor prayed for him, and the Lord restored his health.

"You just talk to Jesus as a friend and tell Him your worries. He will answer your prayers, and if it is His will, you will get up from your bed and walk," the pastor assured him.

So Nimal started to talk to God.

Then, one morning, he felt like his hands and legs had life in them again. He shouted for joy and got up out of his hospital bed. Slowly, he took step after step. The Lord restored him, and eventually, he walked out of the hospital.

Nimal knew it was Jesus who had healed him from the gunshot wound, but he still didn't understand the Good News. This time, the Lord led several people to reach out to him—one was a national missionary, and the rest were the missionary's sponsors, thousands of miles away.

With the backing of believers on the other side of the world, GFA-supported missionary Ashane Ranatunga shared the love of Christ with Nimal. Through him, the former thief realized the Lord was not just his Healer but also his Savior.

After learning about the life of Christ, Nimal came to the conclusion that his sufferings were nothing compared to what Jesus had paid for him.

There are a handful of people who decided to sponsor a missionary, to support and pray for Ashane Ranatunga. What they didn't know in partnering with him was that the Lord would use them to rescue a young man recovering from major physical trauma in the jungles of western Sri Lanka, giving him a future and a hope.

No longer in trouble with the law, Nimal is walking with the Lord today, and he has started his own business. He knows Jesus suffered so he could have life—and life to the full.

Rescue lives in the far corners of Asia. Sponsor a national missionary below.