The surrounding countryside’s picturesque serenity warred with the turbulent thoughts churning in Neale’s mind. That morning, the 8-year-old had missed his bus to school, unable to afford the ticket. While it may seem a trivial matter, that bus was the only way Neale could make it to school on time, and he wanted nothing more than to go to school; in fact, he needed to go to school.

Watching His Future Slip Away

Neale lived with his parents, Paton and Kadena, in a rural village nestled among a mountain range. The idyllic and temperate landscape was perfect for growing tea. Like much of the local populace, Kadena and Paton worked in the tea fields. Thanks to the estate authorities, their home was provided for. With both parents working, one would expect their earnings to, at the least, provide for the family’s basic needs—but that was not the case.

On many occasions Neale watched his father stumble home, his breath reeking of alcohol. Almost every day after work, Paton wasted his small daily earnings on drink, leaving Kadena to pick up the slack in the fields. Both of Neale’s parents work in tea field, like this one pictured, to earn a living.

But, on her own, Kadena could not cover everything. Hunger frequently threatened the family as Kadena’s earnings could not consistently put food on the table. There were times she would miss making a meal or forget an errand or chore in their home, mistakes Paton would angrily point out.

Neale wished he could help his mother somehow. Seeing his father’s actions filled the young boy with motivation: He was going to finish school, and when he finished school, he was going to get a good job and provide for his mother. Getting an education was critical to Neale’s future and his dream of taking care of his mother. The World Bank estimates that for just one extra year of schooling there is a 9 percent increase in hourly earnings.1

And every time Neale couldn’t afford the bus fare, the opportunity for a better future grew slimmer and slimmer, sending the young boy deeper into despair. Even when he did make it to school, Neale had to play catch-up. Time was running out.

Kadena worried for Neale; she knew about his dream to one day get a good job to provide for her and their family, but it all hinged upon 8-year-old Neale finishing his education. Even with his sporadic rate of attendance, Neale might join the 53 percent of children living in low- and middle-income countries who are classified as “in-school non-learners”—children who are enrolled in school but do not retain the things they learned.2

The World Bank found that children in this group cannot read or comprehend a short, age-appropriate story by the time they finish primary school. In poorer countries, this number can be as high as 80 percent.3

Neale was walking the same road millions of other children had walked. If his education continued to suffer, there would be no well-paying job slated in his future. In order to hold on to his chances of a better future, Neale needed to stay in school.

Kadena worried her son would lose what little chance he had at a better life. If Neale didn’t finish school, what would happen then? He might join the 160 million child laborers worldwide.4 Then all he would know would be a life of poverty and hardship, a life Kadena did not wish for her son. And what about her younger children? Would they, too, follow in their elder brother’s footsteps?

One day, Kadena received a visitor—one of Neale’s teachers. She had noticed Neale’s dropping grades and she had a solution. There was a program that specifically focused on helping children like Neale, the teacher told Kadena. Neale could get the tutoring he needed to succeed at his lessons and lay a foundation for a better tomorrow.

What Every Child Deserves 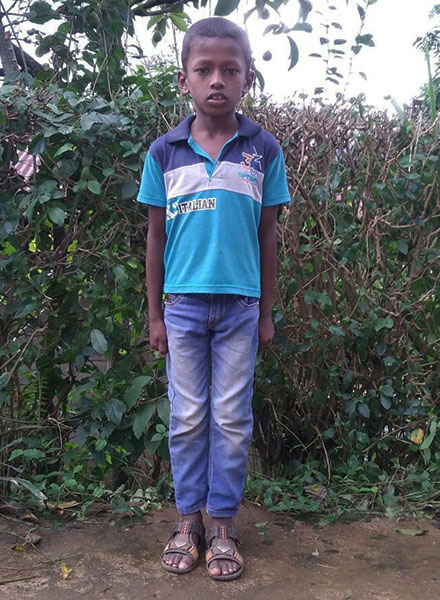 Neale (pictured here) no longer has to worry about his future; thanks to GFA World’s Child Sponsorship Program, he can work toward finishing his schooling, which will one day help him acquire a well-paying job.

Kadena quickly enrolled her eldest in the program, GFA World’s Child Sponsorship Program, where he would be given all that he needed to thrive. This was just the opportunity Neale needed.

The following week Neale sat with dozens of children just like him, paying rapt attention to their tutor. Here, at long last, was the guidance Neale needed. Every day, Neale would be sent from school to the welcoming arms of the child sponsorship staff. The young boy excitedly followed the lessons they taught, taking in all the help to complete his assignments.

Neale also received a nutritious meal, tips on proper hygiene and school supplies—greatly relieving his mother of additional financial expenses. The staff saw to his every need, wanting to help Neale achieve his dream. They offered all sorts of guidance, instilling within him the discipline he needed to advance his education and grow as an individual.

Little by little, as Neale’s grades rose, so did his hope. That good job he wanted didn’t seem so distant now; helping his mother didn’t seem so impossible now. And it was all thanks to the loving encouragement and guidance Neal received from the field staff.

What would have happened had Neale not been enrolled in GFA World’s Child Sponsorship Program is uncertain. Would he have joined the millions of other children working under harsh conditions for pennies a day? Or would he have followed in his parents’ footsteps, working in the tea fields for the rest of his life? Thankfully, we don’t have to wonder that because now Neale is firmly on the best path to fulfill his dreams. Like these children, Neale (not pictured) sat with his peers, receiving guidance and encouragement from GFA child sponsorship staff.

Like Neale, millions of children face similar circumstances of poverty threatening to swallow their futures, leaving nothing but hopelessness and despair. But, through GFA World’s Child Sponsorship Program, the chains of poverty are being broken. Neale is among the 70,000 children receiving the care and tools they need to break free from impoverishment—yet there remain many more in need. Give today, and you can help put a child on their way toward a better future, just as Neale is »