You can’t walk on this path, they said. You’ll contaminate it for everyone else, they scowled. You’re not welcome here.

The words stung Bakari’s heart as he turned his face in shame. His neighbors and family no longer saw him as a man; all they saw were the curled hands and missing fingers. To them, these abnormalities heralded warnings to stay far away. 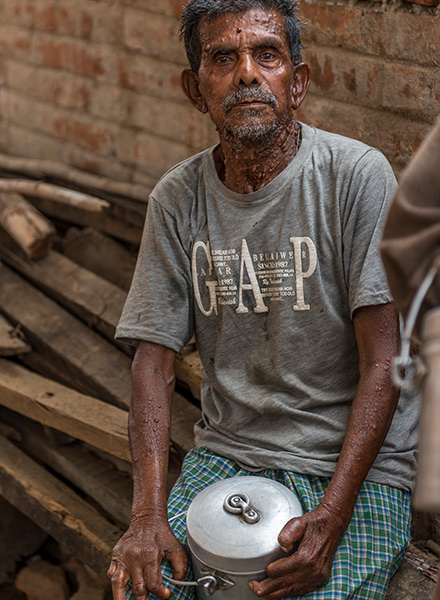 Bakari (not pictured) contracted leprosy much like the man seen here.

A Life Marred by Disease, Shame

Bakari was once respected in his small village. He worked hard and made an honest living as a farmer and as a daily wage laborer.

But Bakari’s life began to change when he fell sick. The fever in Bakari’s body and pain in his limbs hindered his work. His condition grew progressively worse, and soon Bakari lost all feeling in his fingers and feet. With nerves failing to send pain signals, Bakari suffered wounds that were stubborn in healing. His hands began to bend and deform in paralysis.

Then came the dreaded diagnosis: leprosy.

Some may consider it an archaic condition that no longer occurs, but for Bakari and thousands of others, it is a crippling reality. In 2018, there were 208,619 new cases of leprosy,1 also known as Hansen’s disease, most of which occurred among poor and other vulnerable, marginalized population groups.2

As Bakari became disfigured, a physical and emotional barrier formed between him and the rest of society—a barrier commonly experienced by leprosy patients.3 Family and friends shunned Bakari as the word “leprosy” stripped his dignity. Like many people in his area, they were afraid the disease would spread to them, so they avoided any contact with Bakari.

"... they treated me with hostility. But I was determined to use the road and thought that one day people would understand that I am a man with value.”

For many, the stigma surrounding leprosy hinders even seeking medical treatment.4 Though leprosy is curable and 95 percent of people are naturally immune, too few people understand these facts. According to a GFA World special report, “Believing there is nothing to be done or that treatment is too expensive to obtain, those who could be cured of their disease hide in secret, waiting for the ‘unavoidable’ day when sores and disfigurement announce them as ‘lepers.’”5 And then they are often victims of discrimination and ostracism, sometimes rejected by their own families and forced to live in leprosy colonies.

“People were very cruel,” Bakari said, “and they treated me with hostility. But I was determined to use the road and thought that one day people would understand that I am a man with value.”

Bakari took medication, but the disease was too advanced for it to improve his condition. He continued to worsen, with extensive damage to his feet and hands. Leprosy, an infectious disease caused by bacteria, attacks patients’ nerves and mainly affects their skin, peripheral nerves, eyes and the mucous membrane in their upper respiratory tract.6 Left untreated, this can lead to crippling deformities, especially in one’s hands, feet and face.7

For Bakari, as for other leprosy patients, manual labor became increasingly difficult—even dangerous—as the disease took its toll.8 Everyday tasks became a challenge. Compounded by the social stigma, many leprosy patients can’t find employment and often resort to begging.9

Ostracized by his family and community, Bakari suffered with his debilitating disease alone. For many years, he lived in humiliation and distress. Had he done something to deserve this? Was he now less of a man? Would anyone accept him; see his value? 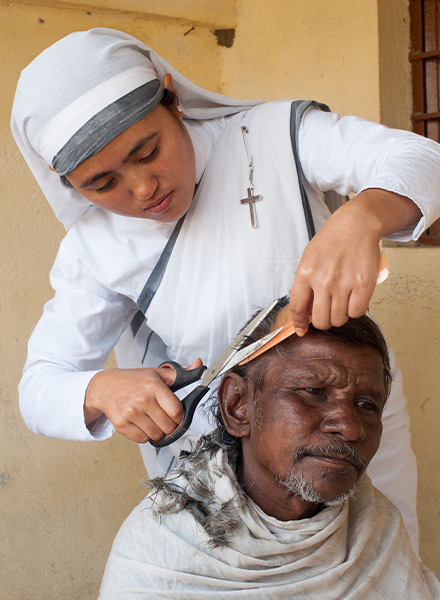 Leprosy patients often lose the ability to do everyday tasks. GFA Sisters of Compassion help them with basic needs, such as cooking, cleaning, trimming nails and cutting hair.

Encounter with One Who Loves Leprosy Patients

One day Bakari met GFA worker Kalan, who had intriguing things to share about a man named Jesus. Bakari listened intently, and as he learned how Jesus loved and healed leprosy patients, tears rolled down his face. Could it really be? Could he be loved despite his disease? Did this Jesus really see his value instead of turning away in disgust?

“Jesus loves you!” the pastor assured him.

As Bakari gladly accepted this love, peace and joy filled his heart, bringing healing to the deep wounds of his soul.

“Jesus loves me,” said a smiling Bakari. “In Jesus, I found peace and joy.”

You Can Help Change the Definition

For far too many leprosy patients, the moment they are diagnosed “is the moment society defines them by their disease—not by their value as human beings.”10 In 2007, GFA workers began ministering among leprosy patients with an aim to change that definition, calling them “friends” to help them forget their sickness and not feel its stigma. 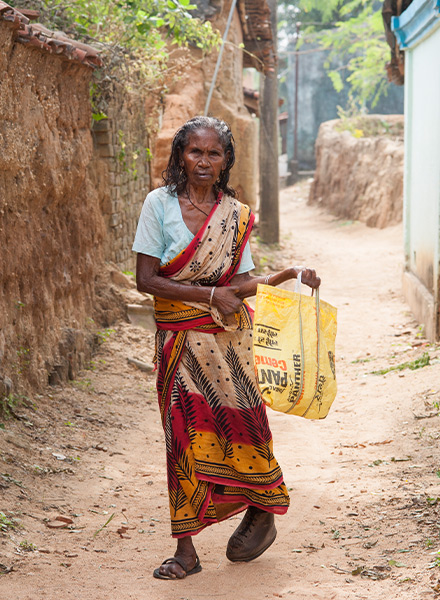 Unable to work, many leprosy patients resort to begging.

The ministry has expanded to include 44 leprosy colonies, each home to as many as 5,000 patients. As GFA workers have cared for these outcasts of society, thousands have been impacted. In addition to experiencing love and respect through these servants, “many leprosy patients are discovering that physical healing—through both prayer and medical treatment—is possible.”11

"For far too many leprosy patients, the moment they are diagnosed “is the moment society defines them by their disease—not by their value as human beings.”*10

As bonds are formed, patients whose own families have rejected them often welcome GFA caregivers as sons and daughters. Patients are valued for who they are, not despised because of their disease.

You can help leprosy patients like Bakari discover a love greater than their disease and find new hope and acceptance. GFA workers look beyond social stigma and care for leprosy patients in practical ways. They serve as the hands and feet of Christ as they tend patients’ wounds, distribute food, provide medical aid and education, help with everyday tasks patients can no longer do on their own, and pray for needs. You can lift up those hands and provide the resources they need to continue demonstrating Christ’s love to those suffering from leprosy.

Give to Leprosy Ministry