A Miraculous Sweater Changed Her Life

Kalyani slid her shawl from the wire hanger on the mud wall of her home and wrapped it around her. A draft swept through the roof’s cracks in her bedroom, giving her a sense of what awaited her.

She closed her eyes, pressed her hands together and prayed before walking out the door.

The biting wind of an early winter morning assailed her, and Kalyani hugged the shawl closer to her body for protection as she walked, seeking people who needed prayer or encouragement or hope.

Did Kalyani think about how cold she felt or the way her body reacted to the dropping temperatures? Or were her thoughts set on the people around her who needed to know Jesus?

Mysterious Illness Flares Up in Winter

For years, Kalyani battled winter; her body swelled whenever the cold hit her skin. Neither she nor her family understood why it happened. Maybe it had something to do with her kidneys. She had been diagnosed with kidney problems a few years before becoming a GFA worker. Much like the 736 million people living on less than $1.90 a day,1 Kalyani’s father, a daily wage laborer, couldn’t afford the expensive medical treatment needed to bring healing. If he pursued treatment, he’d likely have to sell everything he owned or take out loans, which would only push him and his family deeper into poverty. 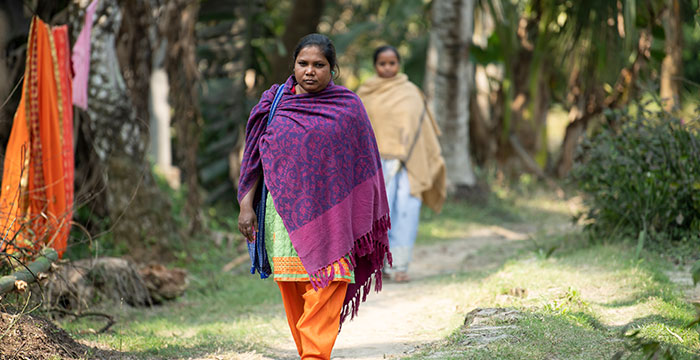 In the winter, GFA worker Kalyani suffered with mysterious health issues because she was not able to keep warm. All she had was a shawl to protect her from the cold weather.

Kalyani’s doctor advised her to keep her body well covered in the winter or she would become even more sick, but there was nothing the poor laborer’s daughter could do.

“Ask the Lord to protect you and heal you from the sickness you are suffering from,” Kalyani’s father told her, saddened he could not offer his daughter the help—or warm clothing—she needed. “The doctor is not the solution, and we are not the solution, but only God can solve your problem.”

Even though Kalyani lived in a region that had mild winters compared to the sub-zero temperatures experienced by people living within the Arctic Circle or the foothills of the Himalayas, studies have shown that “mortality increase[s] to a greater extent with given fall of temperature in regions with warm winters.”2

The year-round daily temperatures in Kalyani’s region usually hovered between the 70s and 90s Fahrenheit, with winter temperatures dropping into the 50s. But even a 20-degree drop in temperature in a day can exasperate pre-existing medical conditions and result in a greater number of deaths—especially if people aren’t well prepared for the shifting degrees.

One study reported that “populations in low- and middle-income countries (LMICs) such as India are particularly vulnerable to adverse climate conditions due to having fewer physical adaptive measures such as air conditioning or heating, and less access to medical treatment…”3

Kalyani didn’t live in a house with central heating. She didn’t have a space heater. She didn’t have the three layers of winter clothing often recommended to safeguard a person from the cold.

Kalyani had a shawl, her only shield against the cold, and it was a flimsy one. 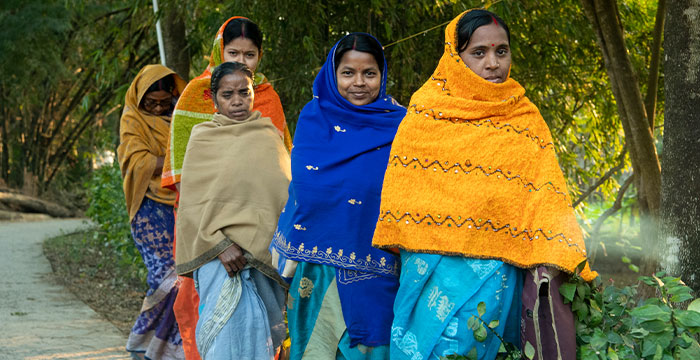 Some studies have shown that in places with mild winters, the risk of morbidity and mortality increases because people do not have the protective gear needed to stay warm when temperatures drop even moderately. In Kalyani’s region, many people go through winters with only a shawl.

When Kalyani went to Bible college, her sickness persisted. Throughout the two years of studying and growing in the Lord, preparing herself to be God’s hands and feet to her people, she suffered silently, not wanting her sickness to drag her away from her calling. The winter mornings were especially difficult on days she and fellow students went out for practical ministry, which meant being in the cold with only a shawl to protect her as she shared Christ’s love.

She persevered, however, and years after graduating, Kalyani became a leader of GFA’s women’s ministry in her district, overseeing 58 Women’s Fellowships. She traveled in rain or shine, in warm weather or cold weather, to encourage and grow the fellowships under her care. When the weather was nice, she and another GFA worker would bike to these fellowships, many of which were seven to nine miles away.

The bicycle made it possible to make the best use of their time, enabling them to visit multiple women and fellowships in a day without getting fatigued. But on cold days, with a shawl wrapped around her arms, steering became a challenge. Kalyani abandoned her bike on those days, preferring the safety of walking—even though it meant longer hours in the cold.

Today was one of those days as she walked down streets, offering people literature about Christ. How much longer would she have to endure this troublesome sickness? There were mornings when the warmth of her bed tempted her to stay indoors and seek the comfort of a blanket instead of those in need of the Savior. She’d lay there a few moments, reluctant to go outdoors, probably thinking of all the excuses that would make it easier for her to give in to temptation. I am sick; my body cannot tolerate this weather. Others are probably doing the same thing. Who else would be out in this cold?

“Ministry is something that the Lord has given me. . .and I have to go out and share … no matter how cold it gets during winter.”

But Kalyani knew she wasn’t called to a life of comfort. Her years in Bible college had likely prepared her for those days of temptation. And as she obediently embraced the cold, knowing the repercussions it would have on her physical health, God granted her the grace she needed to do what she wanted most and not what she wanted to do in that moment of temptation.

“Ministry is something that the Lord has given me,” she said, “and I have to go out and share … no matter how cold it gets during winter.”

Knowing her family’s poverty and her health condition, Kalyani’s field leader surprised her with a gift that would change her life in ways she didn’t expect.

Kalyani’s fingers traced the purple, gray and cream stripes of her new knit sweater. The details in the knitting, the wave and chevron designs, the white buttons surrounded in clear ripples were beautiful. More importantly, this sweater would keep her warm.

But it also turned out to be a gift God would use to bring healing. 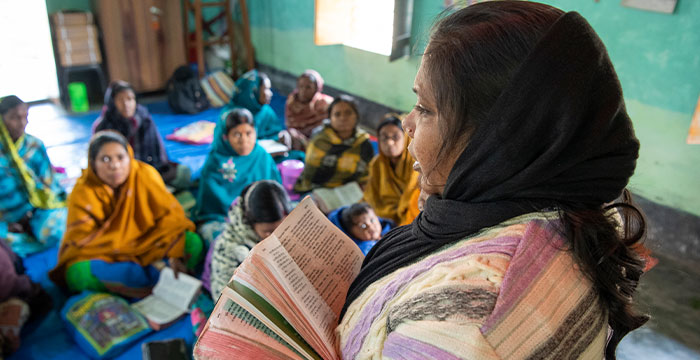 Kalyani provides leadership to around 58 Women’s Fellowships in her district. No matter the weather, she needs to visit each fellowship to guide and care for them.

“Ever since I received … this sweater, the Lord has healed me and protected me from all sicknesses,” Kalyani said. “It’s like a miracle the Lord did in my body ever since I started using this sweater during the winter season. … I have been cured of all the physical ailments that I used to have when I didn’t have this sweater.”

Kalyani no longer feels the temptation to stay indoors because she has what she needs to stay warm. Now, she slips her striped sweater off the wire hanger on the mud wall of her house and puts it on. She closes her eyes, presses her hands together and prays before heading out the door.

The biting wind of an early winter morning tries to assail her, but Kalyani is warm. She grabs her bicycle and maneuvers it through the streets, her arms free to steer. When she reaches a Women’s Fellowship, women eager for encouragement and prayer wait for her, and she’s ready for the long day.

Be Part of a Miracle

A warm sweater boosted Kalyani’s ministry efforts in the winter. Because she no longer had to worry about her body swelling or other health consequences of being in the cold without proper protective gear, Kalyani became more active in ministry, able to endure longer hours outdoors and visit with more people to share God’s gracious love.

“It is very important to do ministry during winter season,” Kalyani said. “This sweater has become very handy and very helpful for me, which protects me from the cold, from sickness, from inconvenience. Because of this, I am able to go out and serve the Lord.” 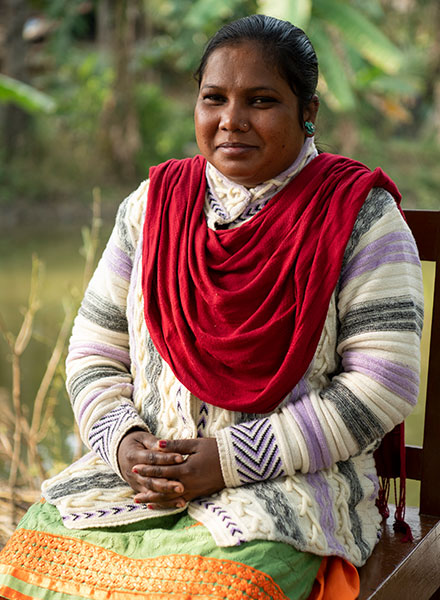 After Kalyani received a warm sweater through a GFA gift distribution, her mysterious illness vanished, and she was able to be more effective in ministry.

There are many other people like Kalyani who aren’t prepared for chilly winter mornings or nights. Many, like Kalyani’s father, don’t have the resources to buy the winter clothing they or their families need to endure the colder weather well.

Studies have shown how vital protection is against sudden weather changes to reduce morbidity and mortality during the winter season—and having warm layers of clothing is an essential part of those protective measures.4

For Kalyani, having just one warm sweater was enough to bring a miraculous healing and bless her ministry.

“I would like to thank those who have given me this sweater,” she said, “because they have seen my need, they have understood that I needed this warm clothes [for] ministry in the winter season, and they have given generously.”

“This sweater has become very handy and very helpful for me, which protects me from the cold, from sickness, from inconvenience. Because of this, I am able to go out and serve the Lord.”

At the same time, Kalyani knows there are many other men and women entrenched in poverty who need winter clothing: “There are so many villagers … who struggle due to lack of resources. … Those people are not able to buy immediate clothes for themselves. … Having warm clothes like this will be a great source of energy and encouragement for our pastors and our [workers].”

You can provide a great source of energy and encouragement to those in need by giving toward GFA’s winter clothing packets. You may even end up being part of a miracle in someone’s life.