Woman Exchanges Drops of Misery for Sounds of Peace

Another hard day’s work. Another argument with her husband. Another night Dahiana’s five children would go to bed hungry.

Dahiana sat in the small structure they called home. Water dripped from the leaky roof above. Perhaps, as an agricultural worker, Dahiana should have been grateful for the rain that would benefit the crops and give her and Marsden, her husband, work. Perhaps she could have been grateful if the mere tarp over their heads did more to keep the clouds’ downpour outside, where it belonged. Instead, the drops just added to Dahiana’s misery.

In a predominantly agrarian community, most of the people in Dahiana and Marsden’s region were in some way dependent on agriculture for their livelihood, as are 65 percent of the world’s poor.1 With no land of their own and no local work to be found, the couple traveled to different villages as daily wage laborers, joining the 95 million migrant workers worldwide who leave their homes to try to make ends meet and feed their families.2

According to the International Labour Organization, “Unemployment and increasing poverty have prompted many workers in developing countries to seek work elsewhere.”3 Many such workers are among the 736 million people worldwide who live below the poverty line, working hard for a meager $1.90 or less a day.4 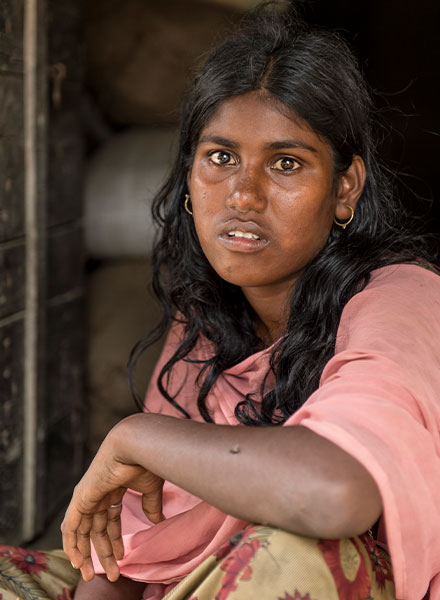 Dahiana (not pictured) was overwhelmed by the troubles of her life.

Dahiana and Marsden worked mostly in agriculture, but the lack of irrigation made cultivation heavily dependent on rainfall, and such work wasn’t always available. Sometimes they found other work, but their toil did little to change their financial crisis.

Marsden’s habits only exacerbated the family’s circumstances. While Marsden worked hard, he also drank hard, squandering his earnings on alcohol and leaving Dahiana to shoulder the responsibility of providing for their children. She strained to scrape together enough funds to feed the children and send them to school, hoping to give them a better future, but all too often the funds fell short. Eventually, she made the difficult decision to send them back to her home village, probably to stay with relatives, hoping they would have better food and education there.

736 million people worldwide live below the poverty line, working for $1.90 or less a day.

Quarrels filled their home as Marsden reached the end of his earnings and sought more money from Dahiana so he could have another drink. Perhaps she wondered how he could ask such a thing when they had struggled to feed their children. Perhaps her anger fueled their quarreling as much as his drinking. Misery settled in the small bamboo shed they called home, as well as in Dahiana’s heart.

An old, tattered tarp acted as a roof over their heads. Though sufficient as a temporary covering, tarps are not intended to be used longer than 90 days, much less as a permanent roofing solution.5 Prolonged exposure to the sun, rain and other elements causes tarps to deteriorate, sometimes into literal shreds of material.

Dahiana yearned for a proper roof. A tin roof would be durable and lasting, and it would easily shed the rain. Having a dry refuge from the annual monsoon rains would be a dream come true. But tin sheets were an expense beyond their reach, so Dahiana’s family struggled on, somehow enduring the rainy and winter seasons with little to protect them from the rain or cold. Dahiana lost all hope. Perhaps this dripping and misery would haunt her the rest of her days. 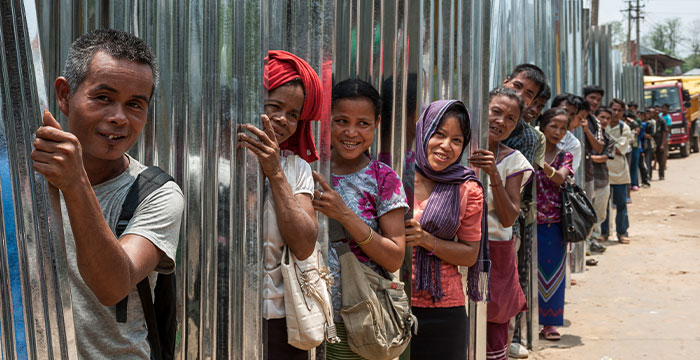 You can show Christ’s love and help a person’s dreams come true by providing practical gifts such as tin sheets.

A Shimmer of Hope

Then Dahiana’s troubles led her to GFA pastor Vashon. She had heard of a church nearby, a church known for helping people in need. Perhaps someone there would help her.

Dahiana visited the church during a prayer meeting, after which she met Pastor Vashon. She poured out her troubles to the pastor and soon learned of a Savior who could deliver her from her problems. Could it be? Was there hope yet for her life?

Putting her trust in Christ, Dahiana began to pray, lifting her petitions and troubles to her newfound Savior. Believers also surrounded Dahiana in prayer as she grew in faith. Peace began to infiltrate Dahiana’s spirit as hope was restored in her soul. Though the leaky roof and other troubles in her life persisted, faith arose in Dahiana, and she believed Jesus would do a miracle in her family.

Still, Dahiana could hardly believe her eyes when that miracle began to unfold. It started with a gift distribution organized by Pastor Vashon. At the event, Dahiana received the tin sheets that had long been her heart’s desire. The shiny metal glimmered with hope. Overwhelmed by joy, Dahiana had no words to express her gratitude.

This miracle boosted Dahiana’s faith, and she began to seek God for another miracle: a change in Marsden. Little did Dahiana know God had already begun to work in Marsden’s heart as he witnessed God’s hand in the provision of a proper roof for their home. Pastor Vashon regularly visited the family, offering spiritual guidance and encouragement. Soon, Marsden’s heart and habits changed. Setting aside his former ways, Marsden began attending prayer meetings and sought to take care of his family instead of wasting his earnings on drink.

With a proper roof and a growing faith, Marsden and Dahiana live in peace. They still hear the raindrops, but the patter against their new tin roof is a soothing reminder of God’s provision and care. 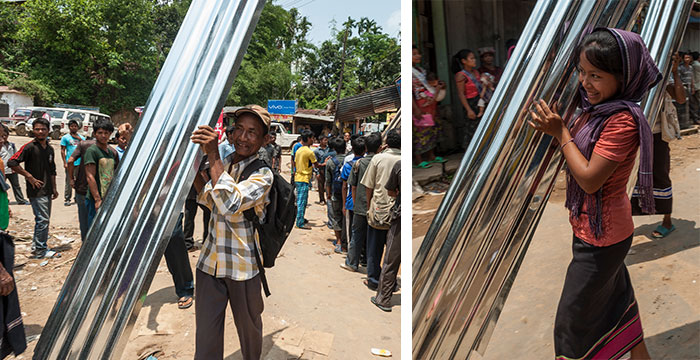 Dahiana (not pictured) longed for proper roofing for her home. Like this woman, she received much-needed tin sheets through a GFA World gift distribution.

There are many other impoverished people who long for something as simple as a proper roof. Practical items such as tin sheets, fishing nets, sewing machines, blankets and mosquito nets greatly improve people’s lives and tangibly show them God cares about them and their everyday needs.

Your gift could be an answer to someone’s earnest prayer.

When you give practical gifts like tin sheets, you give impoverished people a chance at a better quality of life as well as a tangible expression of the love of Christ.