Give Livestock to Families in Need

With a pair of goats, a poor family in Asia can nourish its children with the vitamin-rich milk and sell the excess milk for income.

Janya Prachi and Kashvi Shanti are both widows who live in India. Without the income and status that their husbands had provided them, they struggled to pay the bills. They each live with their children, so there are many mouths in their households to feed.

But there are two "family members" in these two homes that are helping them make ends meet. What's so special about these relatives? They're goats.

The two ladies were in dire straits not long ago. As typical in many Asian cultures, after they lost their husbands, they also lost the respect of their fellow villagers in West Bengal, India. They could only get backbreaking manual labor jobs, and even then, their wages were meager.

Janya and Kashvi had come to know the Lord through the witness of Gospel for Asia missionary Punit Bir and faithfully attended his church. Ignoring cultural norms, the missionary and believers helped the widows as much as possible. Then last December, Punit received several pairs of goats that believers in the West had purchased through the 2007 GFA Christmas Gift Catalog to distribute to needy families in his church. Punit immediately thought of Janya and Kashvi.

Goats are a tremendous blessing to those who receive them. GFA provides goats to hundreds of Dalits (“Untouchables”) and other low caste families each Christmas.

Punit presented each widow with a male and a female goat. When Janya and Kashvi took their new goats home, they began meticulously tending to them.

Now the ladies are able to feed and take care of their children. The goats provide vitamin-rich milk that keeps their children healthy, and they sell the excess milk for income. And one of the goats is now expecting a kid, so they'll soon have even more resources!

The widows are incredibly thankful for how the Lord has provided for them in their time of great need. And they're not the only ones who were blessed. Punit was able to give several others families goats, too.

Goats are a tremendous blessing to those who receive them. GFA provides goats for hundreds of Dalits ("Untouchables") and other low-caste families each Christmas. The goats are much cheaper to take care of than larger farm animals—like cows—so they are not a financial drain on the poverty-stricken families. And their milk can be used to drink or turned into butter and cheese. Some goats can also be sheared to make wool.

In Uttar Pradesh, India, GFA missionary Harish Kumar was able to reach out to the lost through goat distribution. And through seeing the love of Christ demonstrated in a tangible way, some have received Him!

Goats are just one of the many gifts that GFA gives to needy families in Asia each Christmas. The goats provide many resources for the low-caste people who receive them like milk, cheese, butter and wool.

Sharat Debjit was penniless. He and his wife tried everything they could to provide for their family, but because they were low-caste, they couldn't get good jobs. Their children were scrawny and malnourished. The family's outlook was bleak.

Harish and his church found out about Sharat's situation, and during the annual Christmas gift distribution, they gave Sharat's family a pair of goats. A short time later, two baby goats were born.

For the first time, the family is free from the bondage of poverty. Sharat's children have plenty of nourishing milk to drink, and they have plenty of leftover milk to sell in their community.

Being touched by Christ's love through the goat distribution, Sharat and his family wanted to know about the Savior who truly cared for them. As Harish shared the Gospel, Sharat and his wife knew they wanted to follow Jesus. Now the family is faithfully walking with Him.

Along with Sharat and his family, two other families were blessed with pairs of goats, too. Through the goats, God is working mightily to demonstrate His love for the "Untouchable" and low-caste people of India. 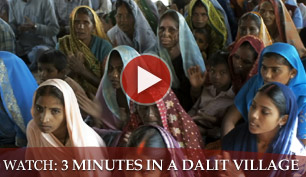