The East Coast Region of Andhra Pradesh encompasses some 9,000 square miles along the state’s northeast shoreline on the Bay of Bengal. This lengthy waterfront includes a major port and naval base at Visakhapatnam (or Vizag), the state’s second-largest city, and a satellite-launching facility on an off-shore island.

The region’s 8 million people live in 7,200 villages and 8 cities, with some 700,000 employed in medium and large companies that produce everything from airplane parts to pharmaceuticals. Telugu is the predominant language in this beautiful, tropical area. 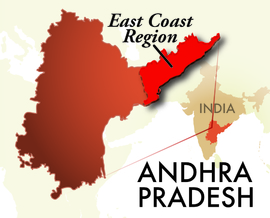