Almighty and everlasting God, mercifully increase in us your gifts of holy discipline, in almsgiving, prayer, and fasting; that our lives may be directed to the fulfilling of your most gracious will; through Jesus Christ our Lord, who lives and reigns with you and the Holy Spirit, one God, for ever and ever. Amen.

Jacob settled in the land where his father had lived as an alien, the land of Canaan. This is the story of the family of Jacob.

Joseph, being seventeen years old, was shepherding the flock with his brothers; he was a helper to the sons of Bilhah and Zilpah, his father’s wives; and Joseph brought a bad report of them to their father. Now Israel loved Joseph more than any other of his children, because he was the son of his old age; and he had made him a long robe with sleeves. But when his brothers saw that their father loved him more than all his brothers, they hated him, and could not speak peaceably to him.

Once Joseph had a dream, and when he told it to his brothers, they hated him even more. He said to them, ‘Listen to this dream that I dreamed. There we were, binding sheaves in the field. Suddenly my sheaf rose and stood upright; then your sheaves gathered around it, and bowed down to my sheaf.’ His brothers said to him, ‘Are you indeed to reign over us? Are you indeed to have dominion over us?’ So they hated him even more because of his dreams and his words.

Assurance of God’s Help and a Plea for Healing

To the leader. A Psalm of David.

Happy are those who consider the poor;
the Lord delivers them in the day of trouble.
The Lord protects them and keeps them alive;
they are called happy in the land.
You do not give them up to the will of their enemies.
The Lord sustains them on their sickbed;
in their illness you heal all their infirmities.

As for me, I said, ‘O Lord, be gracious to me;
heal me, for I have sinned against you.’
My enemies wonder in malice
when I will die, and my name perish.
And when they come to see me, they utter empty words,
while their hearts gather mischief;
when they go out, they tell it abroad.
All who hate me whisper together about me;
they imagine the worst for me.

They think that a deadly thing has fastened on me,
that I will not rise again from where I lie.
Even my bosom friend in whom I trusted,
who ate of my bread, has lifted the heel against me.
But you, O Lord, be gracious to me,
and raise me up, that I may repay them.

By this I know that you are pleased with me;
because my enemy has not triumphed over me.
But you have upheld me because of my integrity,
and set me in your presence for ever.

Blessed be the Lord, the God of Israel,
from everlasting to everlasting.
Amen and Amen.

Paul, called to be an apostle of Christ Jesus by the will of God, and our brother Sosthenes,

To the church of God that is in Corinth, to those who are sanctified in Christ Jesus, called to be saints, together with all those who in every place call on the name of our Lord Jesus Christ, both their Lord and ours:

Grace to you and peace from God our Father and the Lord Jesus Christ.

I give thanks to my God always for you because of the grace of God that has been given you in Christ Jesus, for in every way you have been enriched in him, in speech and knowledge of every kind—just as the testimony of Christ has been strengthened among you—so that you are not lacking in any spiritual gift as you wait for the revealing of our Lord Jesus Christ. He will also strengthen you to the end, so that you may be blameless on the day of our Lord Jesus Christ. God is faithful; by him you were called into the fellowship of his Son, Jesus Christ our Lord.

Divisions in the Church

Now I appeal to you, brothers and sisters, by the name of our Lord Jesus Christ, that all of you should be in agreement and that there should be no divisions among you, but that you should be united in the same mind and the same purpose. For it has been reported to me by Chloe’s people that there are quarrels among you, my brothers and sisters. What I mean is that each of you says, ‘I belong to Paul’, or ‘I belong to Apollos’, or ‘I belong to Cephas’, or ‘I belong to Christ.’ Has Christ been divided? Was Paul crucified for you? Or were you baptized in the name of Paul? I thank God that I baptized none of you except Crispus and Gaius, so that no one can say that you were baptized in my name. (I did baptize also the household of Stephanas; beyond that, I do not know whether I baptized anyone else.) For Christ did not send me to baptize but to proclaim the gospel, and not with eloquent wisdom, so that the cross of Christ might not be emptied of its power.

Christ the Power and Wisdom of God

For the message about the cross is foolishness to those who are perishing, but to us who are being saved it is the power of God. For it is written,

‘I will destroy the wisdom of the wise,
and the discernment of the discerning I will thwart.’

The Proclamation of John the Baptist

The beginning of the good news of Jesus Christ, the Son of God.

As it is written in the prophet Isaiah,

‘See, I am sending my messenger ahead of you,
who will prepare your way;
the voice of one crying out in the wilderness:
“Prepare the way of the Lord,
make his paths straight”’,

John the baptizer appeared in the wilderness, proclaiming a baptism of repentance for the forgiveness of sins. And people from the whole Judean countryside and all the people of Jerusalem were going out to him, and were baptized by him in the river Jordan, confessing their sins. Now John was clothed with camel’s hair, with a leather belt around his waist, and he ate locusts and wild honey. He proclaimed, ‘The one who is more powerful than I is coming after me; I am not worthy to stoop down and untie the thong of his sandals. I have baptized you with water; but he will baptize you with the Holy Spirit.’

The Baptism of Jesus

In those days Jesus came from Nazareth of Galilee and was baptized by John in the Jordan. And just as he was coming up out of the water, he saw the heavens torn apart and the Spirit descending like a dove on him. And a voice came from heaven, ‘You are my Son, the Beloved; with you I am well pleased.’

The Temptation of Jesus

And the Spirit immediately drove him out into the wilderness. He was in the wilderness for forty days, tempted by Satan; and he was with the wild beasts; and the angels waited on him.

“Fasting ends lust, roots out bad thoughts, frees one from evil dreams. Fasting makes for purity of prayer, an enlightened soul, a watchful mind, a deliverance from blindness. Fasting is the door of compunction, humble sighing, joyful contrition, an end to chatter, an occasion for silence, a custodian of obedience, a lightening of sleep, health of the body an agent of dispassion, a remission of sins, the gate, indeed the delight of Paradise.” 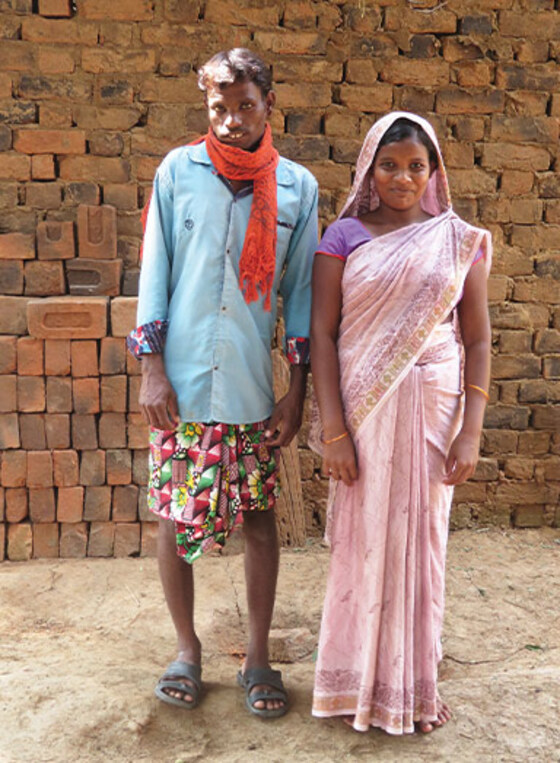 Winter had fallen on Benecia and Danyn’s village. The young couple struggled to stay warm in their home, its mud walls doing little to shield them from the cold winds. As a farmer, Danyn made just enough to sustain himself and Benecia; he couldn’t afford to buy sufficient winter clothes. They lived with no hope for tomorrow.