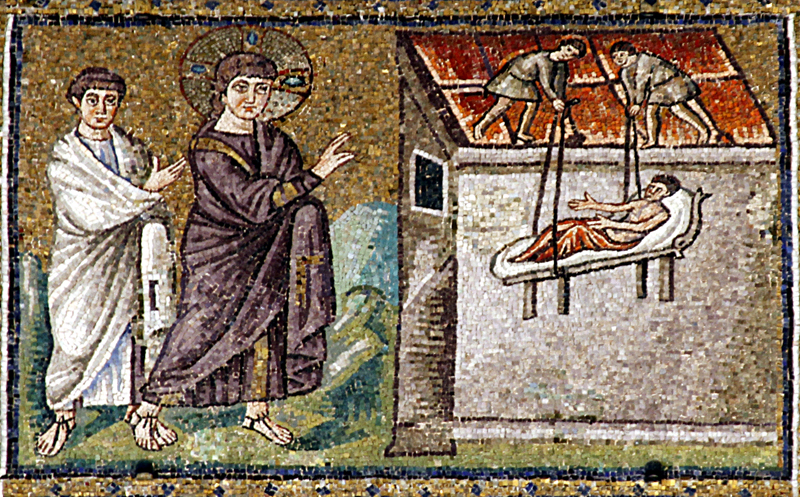 Now when the Lord was about to take Elijah up to heaven by a whirlwind, Elijah and Elisha were on their way from Gilgal. Elijah said to Elisha, ‘Stay here; for the Lord has sent me as far as Bethel.’ But Elisha said, ‘As the Lord lives, and as you yourself live, I will not leave you.’ So they went down to Bethel. The company of prophets who were in Bethel came out to Elisha, and said to him, ‘Do you know that today the Lord will take your master away from you?’ And he said, ‘Yes, I know; keep silent.’

Elijah said to him, ‘Elisha, stay here; for the Lord has sent me to Jericho.’ But he said, ‘As the Lord lives, and as you yourself live, I will not leave you.’ So they came to Jericho. The company of prophets who were at Jericho drew near to Elisha, and said to him, ‘Do you know that today the Lord will take your master away from you?’ And he answered, ‘Yes, I know; be silent.’

Then Elijah said to him, ‘Stay here; for the Lord has sent me to the Jordan.’ But he said, ‘As the Lord lives, and as you yourself live, I will not leave you.’ So the two of them went on. Fifty men of the company of prophets also went, and stood at some distance from them, as they both were standing by the Jordan. Then Elijah took his mantle and rolled it up, and struck the water; the water was parted to the one side and to the other, until the two of them crossed on dry ground.

When they had crossed, Elijah said to Elisha, ‘Tell me what I may do for you, before I am taken from you.’ Elisha said, ‘Please let me inherit a double share of your spirit.’ He responded, ‘You have asked a hard thing; yet, if you see me as I am being taken from you, it will be granted you; if not, it will not.’ As they continued walking and talking, a chariot of fire and horses of fire separated the two of them, and Elijah ascended in a whirlwind into heaven.

From you comes my praise in the great congregation;
my vows I will pay before those who fear him.
The poor shall eat and be satisfied;
those who seek him shall praise the Lord.
May your hearts live for ever!

All the ends of the earth shall remember
and turn to the Lord;
and all the families of the nations
shall worship before him.
For dominion belongs to the Lord,
and he rules over the nations.

To him, indeed, shall all who sleep in the earth bow down;
before him shall bow all who go down to the dust,
and I shall live for him.
Posterity will serve him;
future generations will be told about the Lord,
and proclaim his deliverance to a people yet unborn,
saying that he has done it.

Therefore, since we are justified by faith, we have peace with God through our Lord Jesus Christ, through whom we have obtained access to this grace in which we stand; and we boast in our hope of sharing the glory of God. And not only that, but we also boast in our sufferings, knowing that suffering produces endurance, and endurance produces character, and character produces hope, and hope does not disappoint us, because God’s love has been poured into our hearts through the Holy Spirit that has been given to us.

For while we were still weak, at the right time Christ died for the ungodly. Indeed, rarely will anyone die for a righteous person—though perhaps for a good person someone might actually dare to die. But God proves his love for us in that while we still were sinners Christ died for us. Much more surely then, now that we have been justified by his blood, will we be saved through him from the wrath of God. For if while we were enemies, we were reconciled to God through the death of his Son, much more surely, having been reconciled, will we be saved by his life. But more than that, we even boast in God through our Lord Jesus Christ, through whom we have now received reconciliation.

When he returned to Capernaum after some days, it was reported that he was at home. So many gathered around that there was no longer room for them, not even in front of the door; and he was speaking the word to them. Then some people came, bringing to him a paralysed man, carried by four of them. And when they could not bring him to Jesus because of the crowd, they removed the roof above him; and after having dug through it, they let down the mat on which the paralytic lay. When Jesus saw their faith, he said to the paralytic, ‘Son, your sins are forgiven.’ Now some of the scribes were sitting there, questioning in their hearts, ‘Why does this fellow speak in this way? It is blasphemy! Who can forgive sins but God alone?’ At once Jesus perceived in his spirit that they were discussing these questions among themselves; and he said to them, ‘Why do you raise such questions in your hearts? Which is easier, to say to the paralytic, “Your sins are forgiven”, or to say, “Stand up and take your mat and walk”? But so that you may know that the Son of Man has authority on earth to forgive sins’—he said to the paralytic— ‘I say to you, stand up, take your mat and go to your home.’ And he stood up, and immediately took the mat and went out before all of them; so that they were all amazed and glorified God, saying, ‘We have never seen anything like this!’

Our gracious and mericful Lord, we pray, please grant that we may observe this season of Great Lent with holy fasting, so that we may by Your power, battle against spiritual evils and grow in purity within and without. Enable us to live close to you and ceaselessly praise You, the Father, the Son and the Holy Spirit. As it was in the beginning, is now and always forever will be, world without end. Amen.

It is indeed good and right to give you thanks and praise, Almighty God and Everlasting Father, through Jesus Christ Your Son. For in this season of Great Lent, You lead us into the desert of repentance, that through the pilgrimage of prayer and discipline we may grow in grace and become more like our Lord. Through fasting, prayer and acts of service, You bring us to Your generous heart. May our self denial bring glory to You, and help us to be humble and get rid of our sinful pride. Help us to care for the poor and the destitute. Help us, Lord, to imitate You in our deeds. We thank you for Your mercy and join with saints and angels to proclaim:

Gracious and compassionate Father in heaven, we thank you for strengthening our faith and hope. We praise You for deepening our love through this worship. Pour out the power of the Holy Spirit on us that we may live by the Word of Christ, the Bread of Life. We offer our life at your feet that in this season of Great Lent, the life and nature of Christ may grow deeper in us. We ascribe praise and thanksgiving to You, to Your Son and to the Holy Spirit. As it was in the beginning, is now and always forever will be, world without end. Amen.

For the month of March we at GFA World are focusing our prayers for GFA World’s Clean Water Initiatives. Please join us in praying for them.

Approximately 1.1 billion people worldwide lack access to clean water, which adds unnecessary hardship to people’s everyday lives as they struggle to obtain this vital necessity. People in developing countries often rely on surface water to supply their needs, but these waters are often contaminated and can lead to frequent illness and other health concerns. In these areas, including countries in Asia and Africa where GFA World serves, 80 percent of illnesses are linked to unclean water and poor sanitation.

As part of its efforts to “serve the least of these” and show the tangible love of Christ, GFA World provides clean water through Jesus Wells and BioSand water filters. More than 38 million people have been helped through these initiatives, but many individuals remain in need.

Please join us in praying this month for GFA World’s clean water initiatives and people in need of clean water. 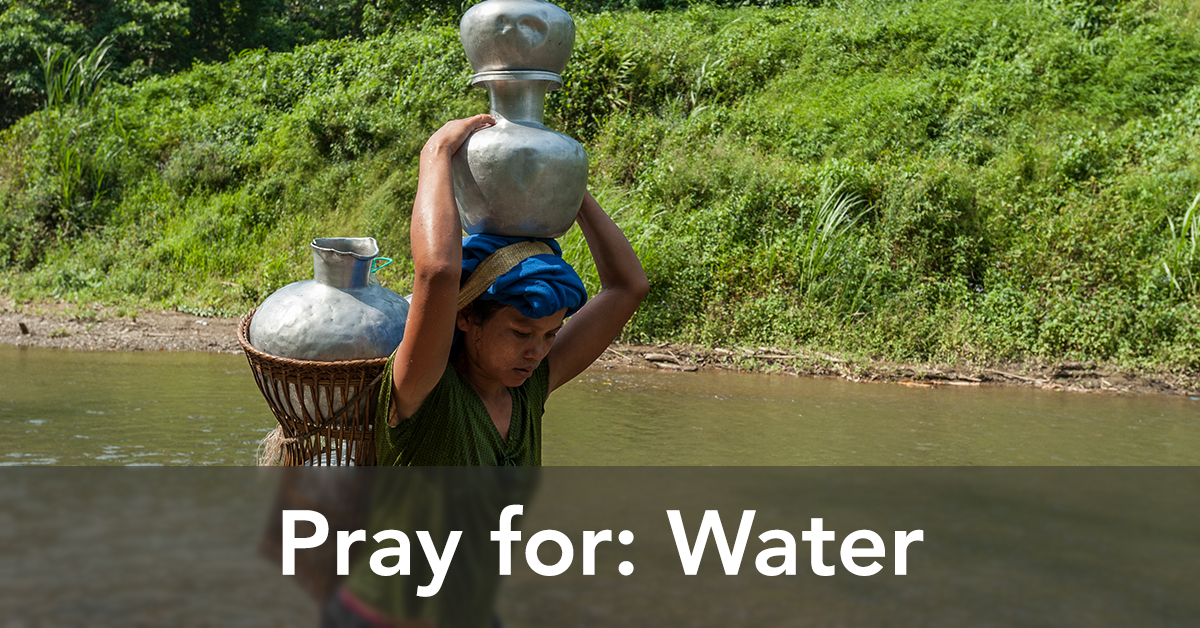