Look upon the heart–felt desires of your humble servants, Almighty God, and stretch forth the right hand of your majesty to be our defense against all our enemies; through Jesus Christ our Lord, who lives and reigns with you and the Holy Spirit, one God, for ever and ever. Amen.

Then Judah stepped up to him and said, ‘O my lord, let your servant please speak a word in my lord’s ears, and do not be angry with your servant; for you are like Pharaoh himself. My lord asked his servants, saying, “Have you a father or a brother?” And we said to my lord, “We have a father, an old man, and a young brother, the child of his old age. His brother is dead; he alone is left of his mother’s children, and his father loves him.” Then you said to your servants, “Bring him down to me, so that I may set my eyes on him.” We said to my lord, “The boy cannot leave his father, for if he should leave his father, his father would die.” Then you said to your servants, “Unless your youngest brother comes down with you, you shall see my face no more.” When we went back to your servant my father we told him the words of my lord. And when our father said, “Go again, buy us a little food”, we said, “We cannot go down. Only if our youngest brother goes with us, will we go down; for we cannot see the man’s face unless our youngest brother is with us.” Then your servant my father said to us, “You know that my wife bore me two sons; one left me, and I said, Surely he has been torn to pieces; and I have never seen him since. If you take this one also from me, and harm comes to him, you will bring down my grey hairs in sorrow to Sheol.” Now therefore, when I come to your servant my father and the boy is not with us, then, as his life is bound up in the boy’s life, when he sees that the boy is not with us, he will die; and your servants will bring down the grey hairs of your servant our father with sorrow to Sheol. For your servant became surety for the boy to my father, saying, “If I do not bring him back to you, then I will bear the blame in the sight of my father all my life.” Now therefore, please let your servant remain as a slave to my lord in place of the boy; and let the boy go back with his brothers. For how can I go back to my father if the boy is not with me? I fear to see the suffering that would come upon my father.’

To the leader: on Lilies, a Covenant. Of Asaph. A Psalm.

Give ear, O Shepherd of Israel,
you who lead Joseph like a flock!
You who are enthroned upon the cherubim, shine forth
before Ephraim and Benjamin and Manasseh.
Stir up your might,
and come to save us!

Restore us, O God;
let your face shine, that we may be saved.

O Lord God of hosts,
how long will you be angry with your people’s prayers?
You have fed them with the bread of tears,
and given them tears to drink in full measure.
You make us the scorn of our neighbours;
our enemies laugh among themselves.

Restore us, O God of hosts;
let your face shine, that we may be saved.

You brought a vine out of Egypt;
you drove out the nations and planted it.
You cleared the ground for it;
it took deep root and filled the land.
The mountains were covered with its shade,
the mighty cedars with its branches;
it sent out its branches to the sea,
and its shoots to the River.
Why then have you broken down its walls,
so that all who pass along the way pluck its fruit?
The boar from the forest ravages it,
and all that move in the field feed on it.

Turn again, O God of hosts;
look down from heaven, and see;
have regard for this vine,
the stock that your right hand planted.
They have burned it with fire, they have cut it down;
may they perish at the rebuke of your countenance.
But let your hand be upon the one at your right hand,
the one whom you made strong for yourself.
Then we will never turn back from you;
give us life, and we will call on your name.

Restore us, O Lord God of hosts;
let your face shine, that we may be saved.

The Unmarried and the Widows

A Girl Restored to Life and a Woman Healed

When Jesus had crossed again in the boat to the other side, a great crowd gathered round him; and he was by the lake. Then one of the leaders of the synagogue named Jairus came and, when he saw him, fell at his feet and begged him repeatedly, ‘My little daughter is at the point of death. Come and lay your hands on her, so that she may be made well, and live.’ So he went with him.

And a large crowd followed him and pressed in on him. Now there was a woman who had been suffering from haemorrhages for twelve years. She had endured much under many physicians, and had spent all that she had; and she was no better, but rather grew worse. She had heard about Jesus, and came up behind him in the crowd and touched his cloak, for she said, ‘If I but touch his clothes, I will be made well.’ Immediately her haemorrhage stopped; and she felt in her body that she was healed of her disease. Immediately aware that power had gone forth from him, Jesus turned about in the crowd and said, ‘Who touched my clothes?’ And his disciples said to him, ‘You see the crowd pressing in on you; how can you say, “Who touched me?”’ He looked all round to see who had done it. But the woman, knowing what had happened to her, came in fear and trembling, fell down before him, and told him the whole truth. He said to her, ‘Daughter, your faith has made you well; go in peace, and be healed of your disease.’

While he was still speaking, some people came from the leader’s house to say, ‘Your daughter is dead. Why trouble the teacher any further?’ But overhearing what they said, Jesus said to the leader of the synagogue, ‘Do not fear, only believe.’ He allowed no one to follow him except Peter, James, and John, the brother of James. When they came to the house of the leader of the synagogue, he saw a commotion, people weeping and wailing loudly. When he had entered, he said to them, ‘Why do you make a commotion and weep? The child is not dead but sleeping.’ And they laughed at him. Then he put them all outside, and took the child’s father and mother and those who were with him, and went in where the child was. He took her by the hand and said to her, ‘Talitha cum’, which means, ‘Little girl, get up!’ And immediately the girl got up and began to walk about (she was twelve years of age). At this they were overcome with amazement. He strictly ordered them that no one should know this, and told them to give her something to eat.

He knows all:
Believe it or not—God knows all things about you and me, in such detail that every hair on our head is known to Him. And, His thoughts towards us are all for good, not for evil. There is no reason to hide or pretend before Him. His love is unchanging regardless of our good or bad behavior. Read and meditate on Psalms 139: 1-10.
—— Metropolitan Yohan

“Even the cross itself was but an expression of an existing reality, since Christ had crucified Himself for the world before the world crucified Him... In Lent we prepare ourselves for the Last Supper. We prepare for two like things coming together. How could those who do not sacrifice themselves be worthy of Him who sacrificed His life? If we eat of a sacrificed body and do not sacrifice our own selves, how can we claim that a union takes place? The Mystical Supper on Thursday, which is the intentional acceptance of a life of sacrifice, is but a preparation for accepting sufferings openly, even unto death.” 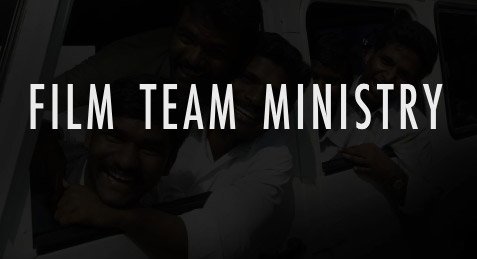 Film teams travel far and put in long hours to show films on the life of Jesus. These films have proven to be one of the most effective tools to bless communities across Asia and share God's hope with them.