With a warm demeanor and courteous manners, the people of the Lucknow Region are known for their lavish hospitality.

Unlike other parts of India, Lucknow has a great deal of contrast between the summer and winter temperatures. Also in the colder months, it is common for a dense fog to settle on Lucknow—making visibility extremely low.

In the eastern portion of the region, people work as rice farmers. In western Lucknow, the land is hilly and not conducive to agriculture, so the residents make their income in factories producing leather goods, pottery, glass and metal. 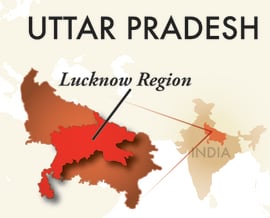