The Northwest Punjab Region shares a western border with Pakistan. Most of the region’s people are Sikhs, who are divided into the Jat and Mazhabi castes. The Jats are higher caste and are mainly involved in agriculture. The lower-caste Mazhabis are laborers, mechanics or technicians.

The soil of the Northwest Punjab Region is extremely fertile and benefits from the two rivers that flow through it. Agriculture is a major part of the economy. Buckwheat, barley, wheat, rice, sugarcane and vegetables are the major crops.

Although Sikhism is the dominant religion, Christian schools, hospitals and other institutions are held in high esteem, and many Sikhs send their children to Christian schools and colleges. 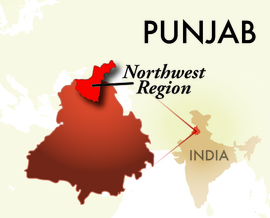