The South Punjab Region is the largest in the state.

The Sikhs from this area were known as great warriors and include several national war heroes. The majority (92 percent) of the South Punjab Region’s people are Sikhs. They are highly literate and speak the Malwi dialect of Punjabi.

Agriculture is the main occupation and the basis for the area’s economy. The region has the highest per-acre yield of rice and wheat in the world.

It is not all rural, however. The city of Ludhiana is a major manufacturing center and home of the largest agricultural university in Asia. Mohali, a city adjacent to Chandigarh, is home to global high-tech firms like Dell, Quark and Philips. 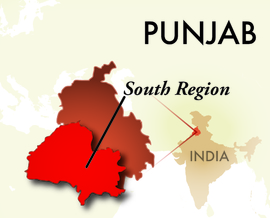