The North Punjab Region is considered to be one of the most fertile areas of the world and is called the “land of two rivers.” These rivers and their tributaries irrigate the region’s fertile soil, making it one of the largest per-capita producers of wheat in the world.

And while most of its people are engaged in agriculture, many are also moving to modern cities like Jalandhar, which has the highest density of hospitals in Asia and a highly regarded engineering college.

The Chamars, a Dalit sub-caste, are the majority people group in this region. Because they were tanners by tradition and handled the hides of dead animals, they were considered untouchables. Today, however, most Chamars in Punjab are farmers. They speak Doabi, a dialect of Punjabi. 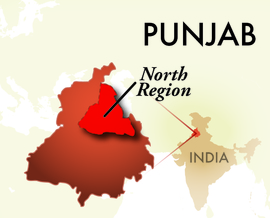