O God, you have given us the Good News of your abounding love in your Son Jesus Christ: So fill our hearts with thankfulness that we may rejoice to proclaim the good tidings we have received; through Jesus Christ our Lord, who lives and reigns with you and the Holy Spirit, one God, for ever and ever. Amen.

Birth and Youth of Moses

Now a man from the house of Levi went and married a Levite woman. The woman conceived and bore a son; and when she saw that he was a fine baby, she hid him for three months. When she could hide him no longer she got a papyrus basket for him, and plastered it with bitumen and pitch; she put the child in it and placed it among the reeds on the bank of the river. His sister stood at a distance, to see what would happen to him.

One day, after Moses had grown up, he went out to his people and saw their forced labour. He saw an Egyptian beating a Hebrew, one of his kinsfolk. He looked this way and that, and seeing no one he killed the Egyptian and hid him in the sand. When he went out the next day, he saw two Hebrews fighting; and he said to the one who was in the wrong, ‘Why do you strike your fellow Hebrew?’ He answered, ‘Who made you a ruler and judge over us? Do you mean to kill me as you killed the Egyptian?’ Then Moses was afraid and thought, ‘Surely the thing is known.’ When Pharaoh heard of it, he sought to kill Moses.

But Moses fled from Pharaoh. He settled in the land of Midian, and sat down by a well. The priest of Midian had seven daughters. They came to draw water, and filled the troughs to water their father’s flock. But some shepherds came and drove them away. Moses got up and came to their defence and watered their flock. When they returned to their father Reuel, he said, ‘How is it that you have come back so soon today?’ They said, ‘An Egyptian helped us against the shepherds; he even drew water for us and watered the flock.’ He said to his daughters, ‘Where is he? Why did you leave the man? Invite him to break bread.’ Moses agreed to stay with the man, and he gave Moses his daughter Zipporah in marriage. She bore a son, and he named him Gershom; for he said, ‘I have been an alien residing in a foreign land.’

O give thanks to the Lord, for he is good;
for his steadfast love endures for ever.
Let the redeemed of the Lord say so,
those he redeemed from trouble
and gathered in from the lands,
from the east and from the west,
from the north and from the south.

Some wandered in desert wastes,
finding no way to an inhabited town;
hungry and thirsty,
their soul fainted within them.
Then they cried to the Lord in their trouble,
and he delivered them from their distress;
he led them by a straight way,
until they reached an inhabited town.
Let them thank the Lord for his steadfast love,
for his wonderful works to humankind.
For he satisfies the thirsty,
and the hungry he fills with good things.

Some sat in darkness and in gloom,
prisoners in misery and in irons,
for they had rebelled against the words of God,
and spurned the counsel of the Most High.
Their hearts were bowed down with hard labour;
they fell down, with no one to help.
Then they cried to the Lord in their trouble,
and he saved them from their distress;
he brought them out of darkness and gloom,
and broke their bonds asunder.
Let them thank the Lord for his steadfast love,
for his wonderful works to humankind.
For he shatters the doors of bronze,
and cuts in two the bars of iron.

Some were sick through their sinful ways,
and because of their iniquities endured affliction;
they loathed any kind of food,
and they drew near to the gates of death.
Then they cried to the Lord in their trouble,
and he saved them from their distress;
he sent out his word and healed them,
and delivered them from destruction.
Let them thank the Lord for his steadfast love,
for his wonderful works to humankind.
And let them offer thanksgiving sacrifices,
and tell of his deeds with songs of joy.

Some went down to the sea in ships,
doing business on the mighty waters;
they saw the deeds of the Lord,
his wondrous works in the deep.
For he commanded and raised the stormy wind,
which lifted up the waves of the sea.
They mounted up to heaven, they went down to the depths;
their courage melted away in their calamity;
they reeled and staggered like drunkards,
and were at their wits’ end.
Then they cried to the Lord in their trouble,
and he brought them out from their distress;
he made the storm be still,
and the waves of the sea were hushed.
Then they were glad because they had quiet,
and he brought them to their desired haven.
Let them thank the Lord for his steadfast love,
for his wonderful works to humankind.
Let them extol him in the congregation of the people,
and praise him in the assembly of the elders.

Now you are the body of Christ and individually members of it. And God has appointed in the church first apostles, second prophets, third teachers; then deeds of power, then gifts of healing, forms of assistance, forms of leadership, various kinds of tongues. Are all apostles? Are all prophets? Are all teachers? Do all work miracles? Do all possess gifts of healing? Do all speak in tongues? Do all interpret? But strive for the greater gifts. And I will show you a still more excellent way.

The Gift of Love

Six days later, Jesus took with him Peter and James and John, and led them up a high mountain apart, by themselves. And he was transfigured before them, and his clothes became dazzling white, such as no one on earth could bleach them. And there appeared to them Elijah with Moses, who were talking with Jesus. Then Peter said to Jesus, ‘Rabbi, it is good for us to be here; let us make three dwellings, one for you, one for Moses, and one for Elijah.’ He did not know what to say, for they were terrified. Then a cloud overshadowed them, and from the cloud there came a voice, ‘This is my Son, the Beloved; listen to him!’ Suddenly when they looked around, they saw no one with them any more, but only Jesus.

The Coming of Elijah

As they were coming down the mountain, he ordered them to tell no one about what they had seen, until after the Son of Man had risen from the dead. So they kept the matter to themselves, questioning what this rising from the dead could mean. Then they asked him, ‘Why do the scribes say that Elijah must come first?’ He said to them, ‘Elijah is indeed coming first to restore all things. How then is it written about the Son of Man, that he is to go through many sufferings and be treated with contempt? But I tell you that Elijah has come, and they did to him whatever they pleased, as it is written about him.’

Deeper roots:
One of the signs that your spiritual roots are going deeper, is seen in your quietness, silence and humility. Have you noticed the change taking place in your behavior and attitude, the impact of being on this journey of the Great Lent? It must make you glad on the inside. Thank God for what He is doing in you and for you. Be thankful.
—— Metropolitan Yohan

“Renounce yourself in order to follow Christ; discipline your body; do not pamper yourself, but love fasting.” 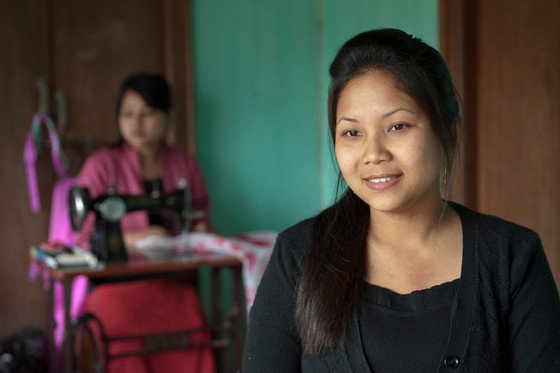 When an accident left Harshika’s father unable to use his hands and legs, the future of the family became uncertain. He had been their sole provider. Harshika’s mother tried to find work in people’s homes, but her income didn’t meet all of their needs.