O God, with you is the well of life, and in your light we see light: Quench our thirst with living water, and flood our darkened minds with heavenly light; through Jesus Christ our Lord, who lives and reigns with you and the Holy Spirit, one God, for ever and ever. Amen.

Then he charged them, saying to them, ‘I am about to be gathered to my people. Bury me with my ancestors—in the cave in the field of Ephron the Hittite, in the cave in the field at Machpelah, near Mamre, in the land of Canaan, in the field that Abraham bought from Ephron the Hittite as a burial site. There Abraham and his wife Sarah were buried; there Isaac and his wife Rebekah were buried; and there I buried Leah—the field and the cave that is in it were purchased from the Hittites.’ When Jacob ended his charge to his sons, he drew up his feet into the bed, breathed his last, and was gathered to his people.

Then Joseph threw himself on his father’s face and wept over him and kissed him. Joseph commanded the physicians in his service to embalm his father. So the physicians embalmed Israel; they spent forty days in doing this, for that is the time required for embalming. And the Egyptians wept for him for seventy days.

When the days of weeping for him were past, Joseph addressed the household of Pharaoh, ‘If now I have found favour with you, please speak to Pharaoh as follows: My father made me swear an oath; he said, “I am about to die. In the tomb that I hewed out for myself in the land of Canaan, there you shall bury me.” Now therefore let me go up, so that I may bury my father; then I will return.’ Pharaoh answered, ‘Go up, and bury your father, as he made you swear to do.’

So Joseph went up to bury his father. With him went up all the servants of Pharaoh, the elders of his household, and all the elders of the land of Egypt, as well as all the household of Joseph, his brothers, and his father’s household. Only their children, their flocks, and their herds were left in the land of Goshen. Both chariots and charioteers went up with him. It was a very great company. When they came to the threshing–floor of Atad, which is beyond the Jordan, they held there a very great and sorrowful lamentation; and he observed a time of mourning for his father for seven days. When the Canaanite inhabitants of the land saw the mourning on the threshing–floor of Atad, they said, ‘This is a grievous mourning on the part of the Egyptians.’ Therefore the place was named Abel–mizraim; it is beyond the Jordan. Thus his sons did for him as he had instructed them. They carried him to the land of Canaan and buried him in the cave of the field at Machpelah, the field near Mamre, which Abraham bought as a burial site from Ephron the Hittite. After he had buried his father, Joseph returned to Egypt with his brothers and all who had gone up with him to bury his father.

The Glory of God’s Reign

The Lord is king! Let the earth rejoice;
let the many coastlands be glad!
Clouds and thick darkness are all around him;
righteousness and justice are the foundation of his throne.
Fire goes before him,
and consumes his adversaries on every side.
His lightnings light up the world;
the earth sees and trembles.
The mountains melt like wax before the Lord,
before the Lord of all the earth.

The heavens proclaim his righteousness;
and all the peoples behold his glory.
All worshippers of images are put to shame,
those who make their boast in worthless idols;
all gods bow down before him.
Zion hears and is glad,
and the towns of Judah rejoice,
because of your judgements, O God.
For you, O Lord, are most high over all the earth;
you are exalted far above all gods.

The Lord loves those who hate evil;
he guards the lives of his faithful;
he rescues them from the hand of the wicked.
Light dawns for the righteous,
and joy for the upright in heart.
Rejoice in the Lord, O you righteous,
and give thanks to his holy name!

Abuses at the Lord’s Supper

Now in the following instructions I do not commend you, because when you come together it is not for the better but for the worse. For, to begin with, when you come together as a church, I hear that there are divisions among you; and to some extent I believe it. Indeed, there have to be factions among you, for only so will it become clear who among you are genuine. When you come together, it is not really to eat the Lord’s supper. For when the time comes to eat, each of you goes ahead with your own supper, and one goes hungry and another becomes drunk. What! Do you not have homes to eat and drink in? Or do you show contempt for the church of God and humiliate those who have nothing? What should I say to you? Should I commend you? In this matter I do not commend you!

The Institution of the Lord’s Supper

For I received from the Lord what I also handed on to you, that the Lord Jesus on the night when he was betrayed took a loaf of bread, and when he had given thanks, he broke it and said, ‘This is my body that is for you. Do this in remembrance of me.’ In the same way he took the cup also, after supper, saying, ‘This cup is the new covenant in my blood. Do this, as often as you drink it, in remembrance of me.’ For as often as you eat this bread and drink the cup, you proclaim the Lord’s death until he comes.

Partaking of the Supper Unworthily

Whoever, therefore, eats the bread or drinks the cup of the Lord in an unworthy manner will be answerable for the body and blood of the Lord. Examine yourselves, and only then eat of the bread and drink of the cup. For all who eat and drink without discerning the body, eat and drink judgement against themselves. For this reason many of you are weak and ill, and some have died. But if we judged ourselves, we would not be judged. But when we are judged by the Lord, we are disciplined so that we may not be condemned along with the world.

In those days when there was again a great crowd without anything to eat, he called his disciples and said to them, ‘I have compassion for the crowd, because they have been with me now for three days and have nothing to eat. If I send them away hungry to their homes, they will faint on the way—and some of them have come from a great distance.’ His disciples replied, ‘How can one feed these people with bread here in the desert?’ He asked them, ‘How many loaves do you have?’ They said, ‘Seven.’ Then he ordered the crowd to sit down on the ground; and he took the seven loaves, and after giving thanks he broke them and gave them to his disciples to distribute; and they distributed them to the crowd. They had also a few small fish; and after blessing them, he ordered that these too should be distributed. They ate and were filled; and they took up the broken pieces left over, seven baskets full. Now there were about four thousand people. And he sent them away. And immediately he got into the boat with his disciples and went to the district of Dalmanutha.

Don't be alone:
Is there someone with you on this Lenten journey? If so, the two of you comprise a single person. When you pray and fast, think of the other who is doing the same for you. No one can be alone in this journey; for knowing God is touching and experiencing love. You are not alone.
—— Metropolitan Yohan 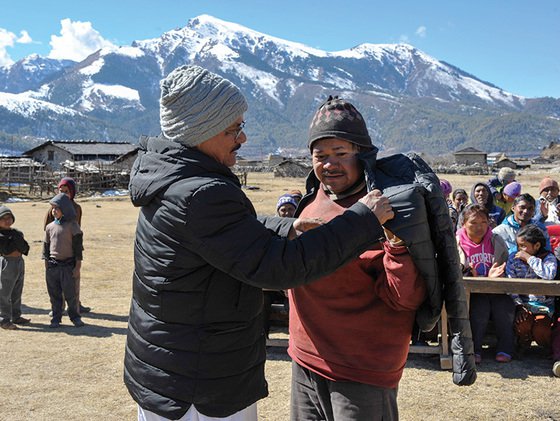 Parmeet once struggled to provide for his family because he couldn’t work in the extremely harsh weather. Now, because of his new jacket, he can work even when it is very cold!