O Lord our God, in your holy Sacraments you have given us a foretaste of the good things of your kingdom: Direct us, we pray, in the way that leads to eternal life, that we may come to appear before you in that place of light where you dwell for ever with your saints; through Jesus Christ our Lord, who lives and reigns with you and the Holy Spirit, one God, for ever and ever. Amen.

Jacob’s Last Words to His Sons

Then Jacob called his sons, and said: ‘Gather around, that I may tell you what will happen to you in days to come.

Assemble and hear, O sons of Jacob;
listen to Israel your father.

‘Simeon and Levi are brothers;
weapons of violence are their swords.
May I never come into their council;
may I not be joined to their company—
for in their anger they killed men,
and at their whim they hamstrung oxen.
Cursed be their anger, for it is fierce,
and their wrath, for it is cruel!
I will divide them in Jacob,
and scatter them in Israel.

‘Judah, your brothers shall praise you;
your hand shall be on the neck of your enemies;
your father’s sons shall bow down before you.
Judah is a lion’s whelp;
from the prey, my son, you have gone up.
He crouches down, he stretches out like a lion,
like a lioness—who dares rouse him up?
The sceptre shall not depart from Judah,
nor the ruler’s staff from between his feet,
until tribute comes to him;
and the obedience of the peoples is his.
Binding his foal to the vine
and his donkey’s colt to the choice vine,
he washes his garments in wine
and his robe in the blood of grapes;
his eyes are darker than wine,
and his teeth whiter than milk.

‘Zebulun shall settle at the shore of the sea;
he shall be a haven for ships,
and his border shall be at Sidon.

‘Issachar is a strong donkey,
lying down between the sheepfolds;
he saw that a resting–place was good,
and that the land was pleasant;
so he bowed his shoulder to the burden,
and became a slave at forced labour.

‘Dan shall judge his people
as one of the tribes of Israel.
Dan shall be a snake by the roadside,
a viper along the path,
that bites the horse’s heels
so that its rider falls backwards.

‘I wait for your salvation, O Lord.

‘Gad shall be raided by raiders,
but he shall raid at their heels.

‘Asher’s food shall be rich,
and he shall provide royal delicacies.

‘Naphtali is a doe let loose
that bears lovely fawns.

‘Joseph is a fruitful bough,
a fruitful bough by a spring;
his branches run over the wall.
The archers fiercely attacked him;
they shot at him and pressed him hard.
Yet his bow remained taut,
and his arms were made agile
by the hands of the Mighty One of Jacob,
by the name of the Shepherd, the Rock of Israel,
by the God of your father, who will help you,
by the Almighty who will bless you
with blessings of heaven above,
blessings of the deep that lies beneath,
blessings of the breasts and of the womb.
The blessings of your father
are stronger than the blessings of the eternal mountains,
the bounties of the everlasting hills;
may they be on the head of Joseph,
on the brow of him who was set apart from his brothers.

‘Benjamin is a ravenous wolf,
in the morning devouring the prey,
and at evening dividing the spoil.’

All these are the twelve tribes of Israel, and this is what their father said to them when he blessed them, blessing each one of them with a suitable blessing.

A Maskil of Ethan the Ezrahite.

You said, ‘I have made a covenant with my chosen one,
I have sworn to my servant David:
“I will establish your descendants for ever,
and build your throne for all generations.”’Selah

Let the heavens praise your wonders, O Lord,
your faithfulness in the assembly of the holy ones.
For who in the skies can be compared to the Lord?
Who among the heavenly beings is like the Lord,
a God feared in the council of the holy ones,
great and awesome above all that are around him?
O Lord God of hosts,
who is as mighty as you, O Lord?
Your faithfulness surrounds you.
You rule the raging of the sea;
when its waves rise, you still them.
You crushed Rahab like a carcass;
you scattered your enemies with your mighty arm.
The heavens are yours, the earth also is yours;
the world and all that is in it–you have founded them.
The north and the south—you created them;
Tabor and Hermon joyously praise your name.
You have a mighty arm;
strong is your hand, high your right hand.
Righteousness and justice are the foundation of your throne;
steadfast love and faithfulness go before you.
Happy are the people who know the festal shout,
who walk, O Lord, in the light of your countenance;
they exult in your name all day long,
and extol your righteousness.
For you are the glory of their strength;
by your favour our horn is exalted.
For our shield belongs to the Lord,
our king to the Holy One of Israel.

Therefore, my dear friends, flee from the worship of idols. I speak as to sensible people; judge for yourselves what I say. The cup of blessing that we bless, is it not a sharing in the blood of Christ? The bread that we break, is it not a sharing in the body of Christ? Because there is one bread, we who are many are one body, for we all partake of the one bread. Consider the people of Israel; are not those who eat the sacrifices partners in the altar? What do I imply then? That food sacrificed to idols is anything, or that an idol is anything? No, I imply that what pagans sacrifice, they sacrifice to demons and not to God. I do not want you to be partners with demons. You cannot drink the cup of the Lord and the cup of demons. You cannot partake of the table of the Lord and the table of demons. Or are we provoking the Lord to jealousy? Are we stronger than he?

Do All to the Glory of God

So, whether you eat or drink, or whatever you do, do everything for the glory of God. Give no offence to Jews or to Greeks or to the church of God, just as I try to please everyone in everything I do, not seeking my own advantage, but that of many, so that they may be saved. Be imitators of me, as I am of Christ.

From there he set out and went away to the region of Tyre. He entered a house and did not want anyone to know he was there. Yet he could not escape notice, but a woman whose little daughter had an unclean spirit immediately heard about him, and she came and bowed down at his feet. Now the woman was a Gentile, of Syrophoenician origin. She begged him to cast the demon out of her daughter. He said to her, ‘Let the children be fed first, for it is not fair to take the children’s food and throw it to the dogs.’ But she answered him, ‘Sir, even the dogs under the table eat the children’s crumbs.’ Then he said to her, ‘For saying that, you may go—the demon has left your daughter.’ So she went home, found the child lying on the bed, and the demon gone.

Then he returned from the region of Tyre, and went by way of Sidon towards the Sea of Galilee, in the region of the Decapolis. They brought to him a deaf man who had an impediment in his speech; and they begged him to lay his hand on him. He took him aside in private, away from the crowd, and put his fingers into his ears, and he spat and touched his tongue. Then looking up to heaven, he sighed and said to him, ‘Ephphatha’, that is, ‘Be opened.’ And immediately his ears were opened, his tongue was released, and he spoke plainly. Then Jesus ordered them to tell no one; but the more he ordered them, the more zealously they proclaimed it. They were astounded beyond measure, saying, ‘He has done everything well; he even makes the deaf to hear and the mute to speak.’

“You can live a greedy, self–indulgent life. Or you can choose the way of the cross, living for others as Jesus did and still calls us to imitate today.”
— excerpt from Road to Reality
—— Metropolitan Yohan

“Prayer is reaching out after the unseen; fasting is letting go of all that is seen and temporal. Fasting helps express, deepen, confirm the resolution that we are ready to sacrifice anything, even ourselves to attain what we seek for the kingdom of God.” 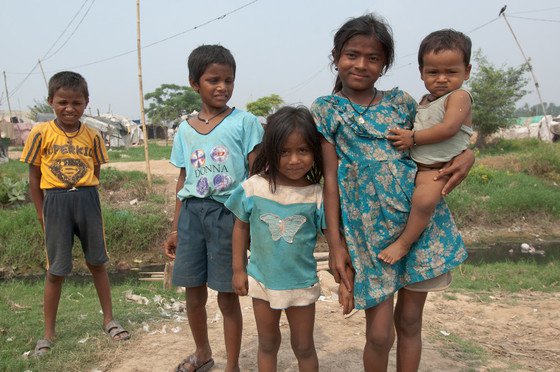 Sitara feared what her kind visitors might think if she told them the truth about her family’s circumstances. Her children depended on her—it was her responsibility to clothe and provide for them—but her job as a house servant didn’t make enough to feed five small mouths.