O God, you have called us to be your children, and have promised that those who suffer with Christ will be heirs with him of your glory: Arm us with such trust in him that we may ask no rest from his demands and have no fear in his service; through Jesus Christ our Lord, who lives and reigns with you and the Holy Spirit, one God, for ever and ever. Amen.

Seven days passed after the Lord had struck the Nile.

Then the Lord said to Moses, ‘Go to Pharaoh and say to him, “Thus says the Lord: Let my people go, so that they may worship me. If you refuse to let them go, I will plague your whole country with frogs. The river shall swarm with frogs; they shall come up into your palace, into your bedchamber and your bed, and into the houses of your officials and of your people, and into your ovens and your kneading bowls. The frogs shall come up on you and on your people and on all your officials.”’ And the Lord said to Moses, ‘Say to Aaron, “Stretch out your hand with your staff over the rivers, the canals, and the pools, and make frogs come up on the land of Egypt.”’ So Aaron stretched out his hand over the waters of Egypt; and the frogs came up and covered the land of Egypt. But the magicians did the same by their secret arts, and brought frogs up on the land of Egypt.

Then Pharaoh called Moses and Aaron, and said, ‘Pray to the Lord to take away the frogs from me and my people, and I will let the people go to sacrifice to the Lord.’ Moses said to Pharaoh, ‘Kindly tell me when I am to pray for you and for your officials and for your people, that the frogs may be removed from you and your houses and be left only in the Nile.’ And he said, ‘Tomorrow.’ Moses said, ‘As you say! So that you may know that there is no one like the Lord our God, the frogs shall leave you and your houses and your officials and your people; they shall be left only in the Nile.’ Then Moses and Aaron went out from Pharaoh; and Moses cried out to the Lord concerning the frogs that he had brought upon Pharaoh. And the Lord did as Moses requested: the frogs died in the houses, the courtyards, and the fields. And they gathered them together in heaps, and the land stank. But when Pharaoh saw that there was a respite, he hardened his heart, and would not listen to them, just as the Lord had said.

Then the Lord said to Moses, ‘Say to Aaron, “Stretch out your staff and strike the dust of the earth, so that it may become gnats throughout the whole land of Egypt.”’ And they did so; Aaron stretched out his hand with his staff and struck the dust of the earth, and gnats came on humans and animals alike; all the dust of the earth turned into gnats throughout the whole land of Egypt. The magicians tried to produce gnats by their secret arts, but they could not. There were gnats on both humans and animals. And the magicians said to Pharaoh, ‘This is the finger of God!’ But Pharaoh’s heart was hardened, and he would not listen to them, just as the Lord had said.

A Song of Ascents. Of David.

O Lord, my heart is not lifted up,
my eyes are not raised too high;
I do not occupy myself with things
too great and too marvellous for me.
But I have calmed and quieted my soul,
like a weaned child with its mother;
my soul is like the weaned child that is with me.

O Israel, hope in the Lord
from this time on and for evermore.

Since, then, we have such a hope, we act with great boldness, not like Moses, who put a veil over his face to keep the people of Israel from gazing at the end of the glory that was being set aside. But their minds were hardened. Indeed, to this very day, when they hear the reading of the old covenant, that same veil is still there, since only in Christ is it set aside. Indeed, to this very day whenever Moses is read, a veil lies over their minds; but when one turns to the Lord, the veil is removed. Now the Lord is the Spirit, and where the Spirit of the Lord is, there is freedom. And all of us, with unveiled faces, seeing the glory of the Lord as though reflected in a mirror, are being transformed into the same image from one degree of glory to another; for this comes from the Lord, the Spirit.

As he was setting out on a journey, a man ran up and knelt before him, and asked him, ‘Good Teacher, what must I do to inherit eternal life?’ Jesus said to him, ‘Why do you call me good? No one is good but God alone. You know the commandments: “You shall not murder; You shall not commit adultery; You shall not steal; You shall not bear false witness; You shall not defraud; Honour your father and mother.”’ He said to him, ‘Teacher, I have kept all these since my youth.’ Jesus, looking at him, loved him and said, ‘You lack one thing; go, sell what you own, and give the money to the poor, and you will have treasure in heaven; then come, follow me.’ When he heard this, he was shocked and went away grieving, for he had many possessions.

Peter began to say to him, ‘Look, we have left everything and followed you.’ Jesus said, ‘Truly I tell you, there is no one who has left house or brothers or sisters or mother or father or children or fields, for my sake and for the sake of the good news, who will not receive a hundredfold now in this age—houses, brothers and sisters, mothers and children, and fields, with persecutions—and in the age to come eternal life. But many who are first will be last, and the last will be first.’

“Why are so few living out the ‘not I, but Christ’ lifestyle that Paul describes in Galatians 2:20? Although God eagerly desires to manifest Himself within us, I believe it is because so few of us have learned to let the cross do its deadly work in our flesh on a daily basis. We haven’t yet come to a full understanding of the cross.”
— excerpt from Road to Reality
—— Metropolitan Yohan 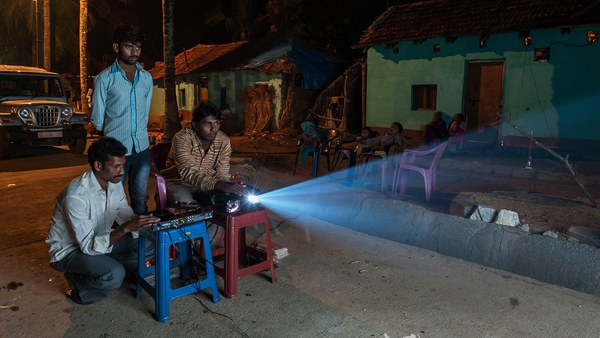 Films on the life of Jesus have proven to be one of the best ways to let people in Asia know about the sacrificial love of God.