Home to three large, energetic cities, Central Gujarat is a region filled with great contrast—the very wealthy and the unthinkably poor. Surrounding the dense urban areas are vast slums with thousands of people living in cardboard huts and makeshift tents.

Kept at the bottom of society, these slum-dwellers cry out for love, care and respect. It is ironic that such poverty exists in the very place that Mahatma Gandhi staged his non violent battle for Indian independence. Thousands of tourists flock to Gujarat to see Gandhi’s headquarters and the world-famous Calico Museum, which has a large collection of rare textiles.

Central Gujarat enjoys significant religious diversity. Hindus, Buddhists, Jains and Christians all live here. There is also a large Muslim community, which traces its roots back to the Muslim sultans who ruled the state centuries ago. 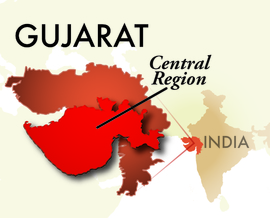