The Purulia West Bengal Region’s 7,000 villages are tucked away among vast green forests, hills and sparkling rivers. The people earn their livelihoods by farming crops such as rice, corn, potatoes, groundnuts and wheat. Some farms are also used for experimental tea-growing. Industries such as cotton weaving along with rice and oilseed milling also provide jobs for the people here.

The Purulia Region is dotted with temples and many famous and important archaeological sites, all of which draw tourists. The Bengalis are the main people group in the area. They have a well-known folk dance called Chau, which has dancers perform while wearing distinctive huge, showy masks.

In tribal areas, the villagers are very loyal to their village chief and in general follow whatever decisions he makes.

There are several places in the Purulia Region reserved especially for leprosy patients and their families. Leprosy is still a feared and misunderstood disease, and those who contract it become outcasts. Christianity first came to this region in 1888 with a leprosy hospital in one of these colonies. 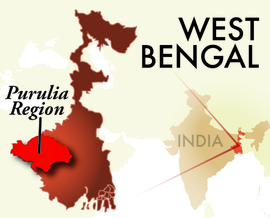