The Southwest Jasidih Region is famous throughout India as a religious center, especially the district of Deoghar, which literally means “God’s House.” Within that district is an area called Babadham, meaning “Father’s Dwelling Place,” which refers to one of the traditional gods of the Subcontinent.

The people of the Southwest Jasidih Region are engaged in mining, agriculture and commerce. There are more than 40 major towns and cities and some 6,400 villages in the region, with lifestyles ranging from urban modern to traditional rural and even primitive in some areas. 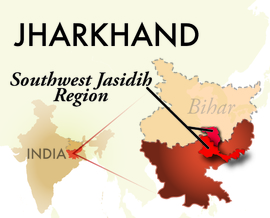