Close to a million people live in the East Manipur Region. English missionary William Pettigrew brought the Gospel to this region in 1896.

Most people work as agricultural laborers and farmers, but the majority of the people are chronically unemployed. The climate is tropical, with abundant and widespread rainfall making it perfect for crops. Farmers grow rice, potatoes, wheat, corn, sugarcane and other vegetables.

A famous landmark here is the British and Indian Army War Cemetery that commemorates those who died in World War II. Each soldier has a stone marker and a bronze plaque that gives a brief account of his anguish and sacrifice in the war. 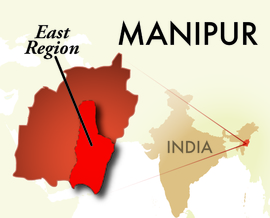