The West Manipur Region, which is currently surrounded by dense forests, was once full of swamps and marshlands. The region is home to Manipur Zoological Garden where the brow-antlered deer, an endangered species in Manipur, lives.

Various tribal groups live in the west, but it’s largely dominated by the Meitei people, who are considered high caste.

West Manipur has a variety of industries such as a spinning mill and factories for assembling bicycles, TV sets and linens. There are also workshops where jewelry and bamboo items are crafted by hand.

Manipuri is the primary language used in this region, but there are other dialects spoken within the tribal communities. 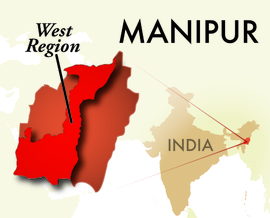