The North Haryana Region is made up of seven districts between the cities of Delhi in the south and Chandigarh in the north. Along this belt lies fertile land where 70 percent of the region’s people are engaged in highly productive agriculture, supplying food for the people of Haryana and the rest of India, too.

North Haryana boasts the only river that flows through the state, the Ghaggara, but most of the agriculture is watered through an extensive irrigation system.

Many of those not involved in farming are employed in the production of fabrics and carpets, while others are part of the state’s extensive tourism infrastructure. 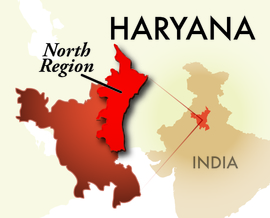