Thanks to extensive irrigation, more than 80 percent of South Haryana’s land is cultivated, producing rich harvests of rice, oil seeds, barley, wheat, chickpeas and sugarcane. And irrigation is needed, because rainfall is sporadic. The region’s 9.5 million people work in a climate that can reach 118 degrees in the summer and drop to freezing in the winter. In addition, because part of the region is less than 20 miles from the Thar Desert, sandstorms are common.

Like other parts of India, the South Haryana Region is made up of multiple regions and people groups with their own distinct history. Because of its many temples, the Bhiwani district is considered another “Benares,” the holy city on the shore of the Ganges River.

Four major people groups live in the region, including the Jats, Gujars, Maharishi Balmiki and Chamars, each with their own occupations and castes. 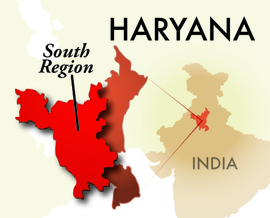