The North Tripura Region is known locally as Unakoti, which means “a place of many gods and goddesses.” It is also the name of a local deity that was worshiped by ancient Tripuran kings.

This is the easternmost region of Tripura, bordering the states of Mizoram and Assam on the east and Bangladesh on the north and south. The majority of the people are Bengalis. They and the indigenous residents live in some 600 villages and two major towns located in four valleys separated by 3,000-foot-high hills.

Because of its warm climate and high rainfall, the North Tripura Region produces good crops of pineapple, oranges, cashews, tea, cotton and rubber. 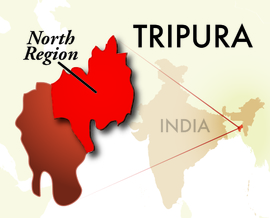