The South Tripura Region includes the city of Udaipur, which was the capital city of Tripura when it was still ruled by kings. It also is home to a famous temple, Tripurasundari, which gives its name to the state.

Bengali people make up the majority of the South Tripura Region’s population, while tribal groups like the Jamatia, Naotai, Tripura and Kolio form a substantial minority. Bengali is the main language, but English, Hindi and Kokborok are also spoken.

South Tripura’s hills and plains offer good soil for tea and rubber plantations as well as other crops. Most of the people are involved in agriculture, along with raising livestock and fishing.

The region is also famous for its bamboo and cane furniture and other products. 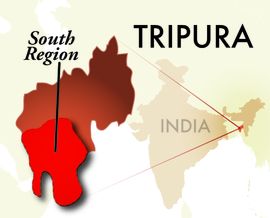