Tezpur is the westernmost region of Assam, bordering West Bengal and the country of Bhutan. The major people group is the Boro, which also is the official language of the region, although Assamese, Hindi and English are also widely used.

With fertile soil and ample rainfall, Tezpur is a productive agricultural area. Yet the people’s livelihoods are being threatened by rebel insurgency and major flooding. This has resulted in many rural residents moving to the cities in search of jobs.

Others in the area cultivate silkworms and weave the silk into dramatically beautiful cloth. The cloth is then turned into clothing and sold throughout the country. 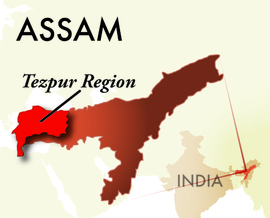