Tinsukia, the easternmost region in Assam, is called “Second Bihar” because it is dominated by immigrants from that North Indian state. Its 1.2 million people live in more than 1,000 villages and seven major towns, and most are poor, eking out a living by working in the tea gardens.

At the same time, the Tinsukia Region is one of the major commercial centers of Assam, fueled by deposits of oil, natural gas, coal and limestone, in addition to being a center of trade for tea, rice, jute and oil seeds.

Like other areas of Assam, bombings and strikes hinder normal commerce and growth. 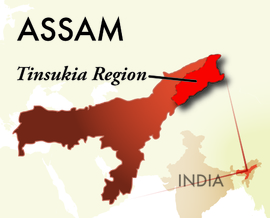