Central Kerala is a sea-faring region that has been a gateway to the larger world for centuries. It is here that the Apostle Thomas landed in A.D. 52. It is also the area where commerce with Arabs, British, Chinese, Dutch, Italians and Portuguese made Kochi (Cochin) a major port and a place of cultural diversity.

Today, because of Central Kerala’s natural beauty and unique history, international cruise ships make Kochi a stop on their voyages.

Central Kerala’s people earn their livings in commerce and industry as well as in agriculture and fishing. They live in some 297 villages and 245 tribal settlements, in addition to the cities of Kochi, Ernakulam and Trichur. 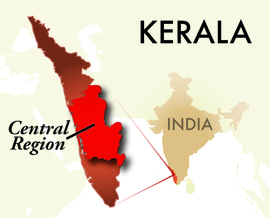