The forests of the Northeast Madhya Pradesh Region are home to two major tribes, the Gond and the Baiga, and to a world-famous tiger sanctuary, Kanha National Park. The Gond are mainly farmers, while the Baiga remain semi-nomadic hunters and woodsmen and are animistic in their beliefs.

The two tribes make up the majority of the region’s inhabitants. They live in more than 21,000 villages and 92 towns and cities. Agriculture is the region’s main source of income.

Most of the region’s people are Hindus, with Muslims, Sikhs, Jains, Buddhists and Christians in the minority. 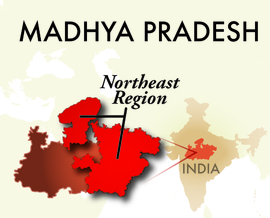