The West Madhya Pradesh Region is economically dominated by the city of Indore, which is considered a “mini-Mumbai” because of its broad manufacturing industry. Everything from cars to pharmaceuticals is made there. Oil refineries are also found in this area.

The majority of the region’s people, however, are mainly engaged in agriculture, producing wheat, corn, soybeans and cotton. They live in some 7,500 villages and 40 towns and cities.

The region is also home to Ujjain, a Hindu holy city and pilgrimage site.

The population is mainly made up of high-caste Hindus and members of the Bhil tribe, who are primarily hunters and very suspicious of outsiders. 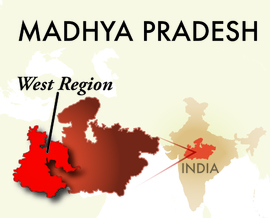